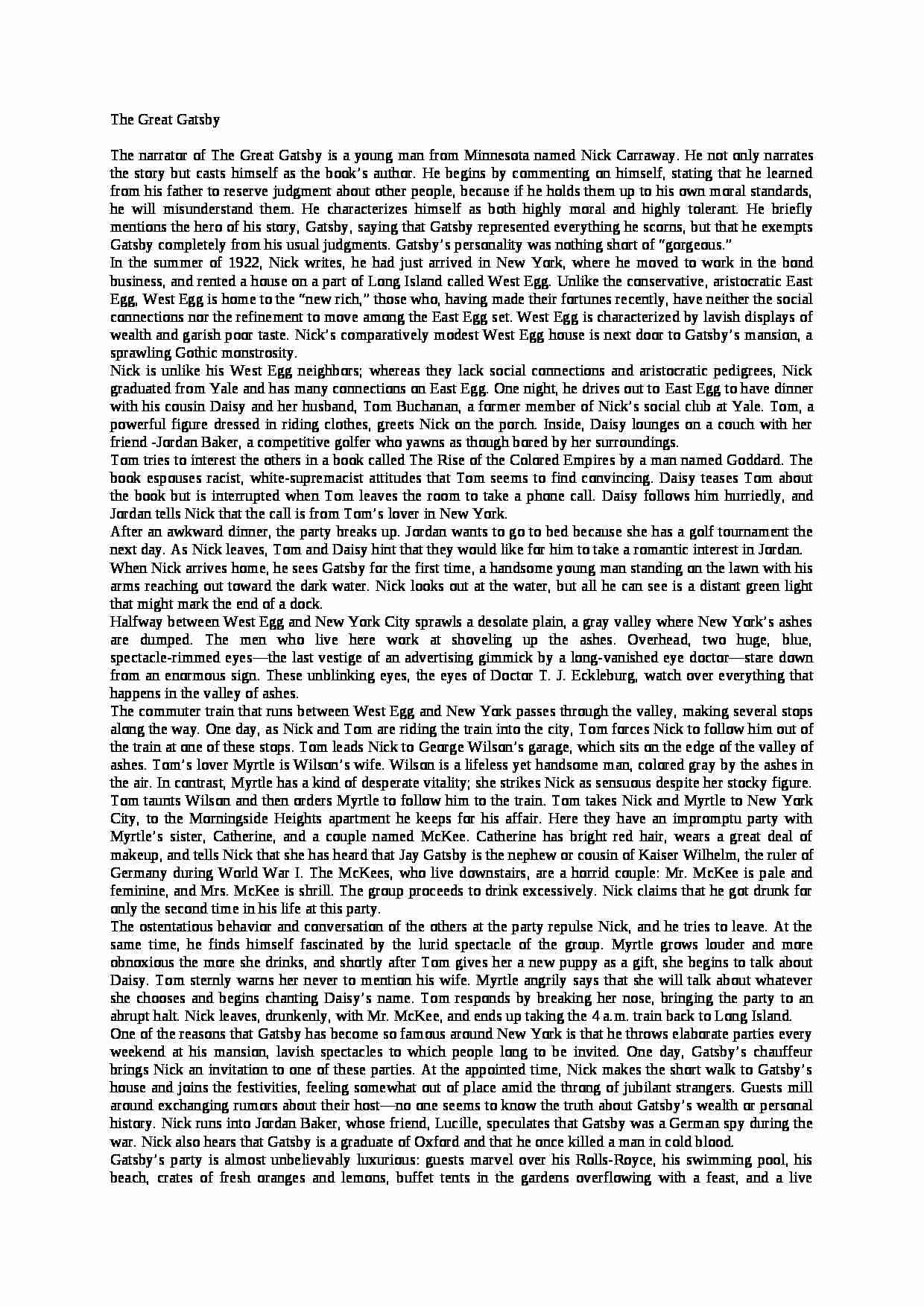 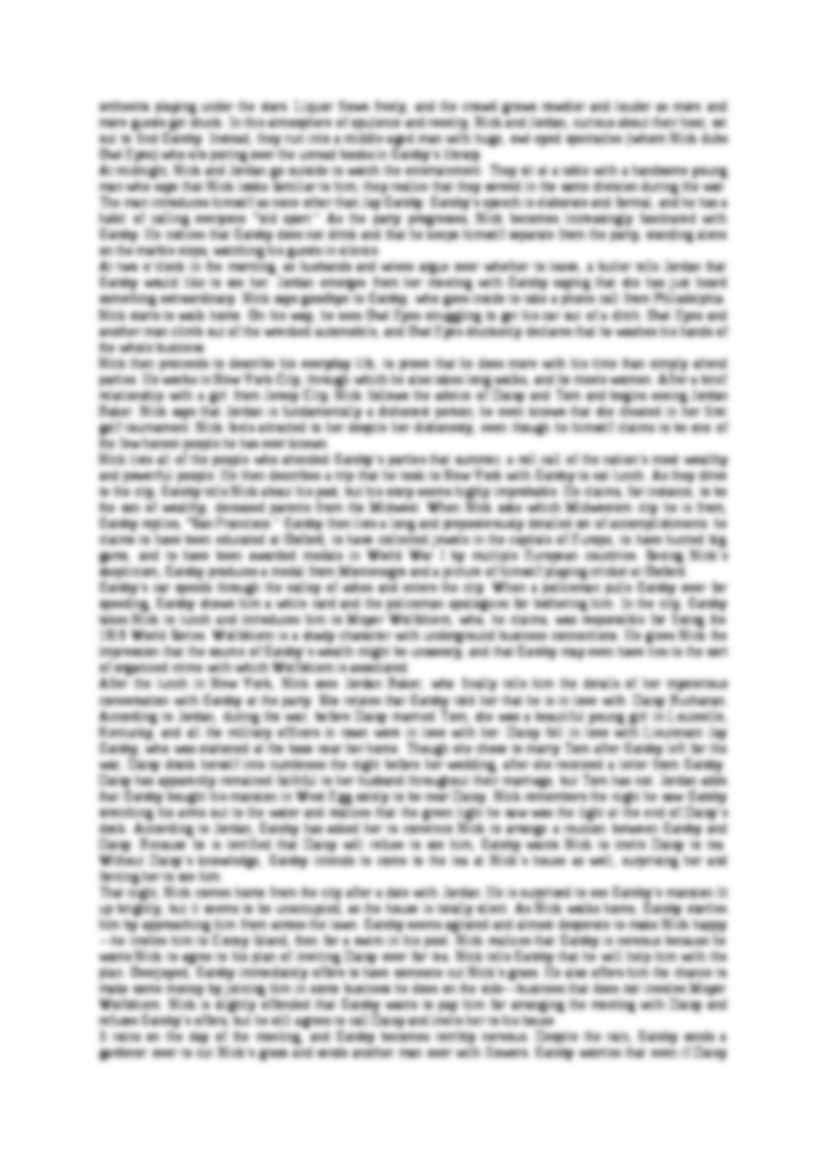 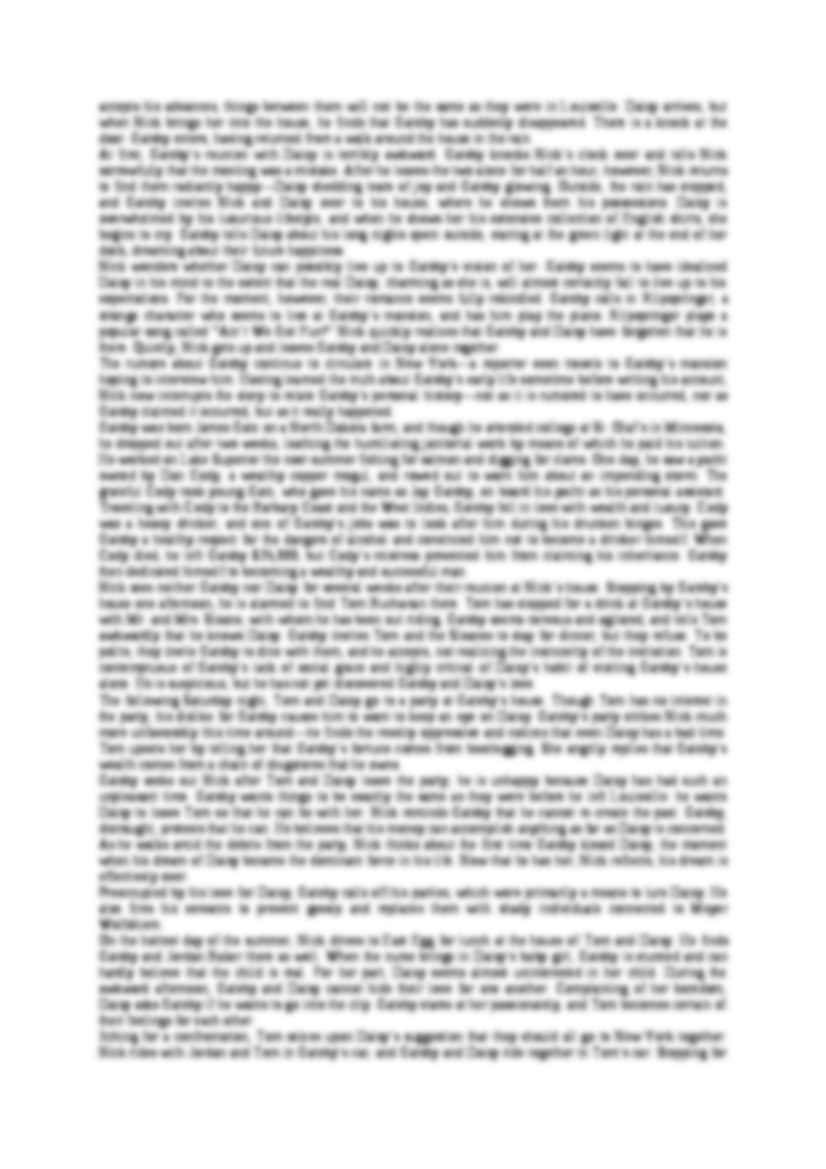 The Great Gatsby
The narrator of The Great Gatsby is a young man from Minnesota named Nick Carraway. He not only narrates the story but casts himself as the book's author. He begins by commenting on himself, stating that he learned from his father to reserve judgment about other people, because if he holds them up to his own moral standards, he will misunderstand them. He characterizes himself as both highly moral and highly tolerant. He briefly mentions the hero of his story, Gatsby, saying that Gatsby represented everything he scorns, but that he exempts Gatsby completely from his usual judgments. Gatsby's personality was nothing short of “gorgeous.”
In the summer of 1922, Nick writes, he had just arrived in New York, where he moved to work in the bond business, and rented a house on a part of Long Island called West Egg. Unlike the conservative, aristocratic East Egg, West Egg is home to the “new rich,” those who, having made their fortunes recently, have neither the social connections nor the refinement to move among the East Egg set. West Egg is characterized by lavish displays of wealth and garish poor taste. Nick's comparatively modest West Egg house is next door to Gatsby's mansion, a sprawling Gothic monstrosity.
Nick is unlike his West Egg neighbors; whereas they lack social connections and aristocratic pedigrees, Nick graduated from Yale and has many connections on East Egg. One night, he drives out to East Egg to have dinner with his cousin Daisy and her husband, Tom Buchanan, a former member of Nick's social club at Yale. Tom, a powerful figure dressed in riding clothes, greets Nick on the porch. Inside, Daisy lounges on a couch with her friend -Jordan Baker, a competitive golfer who yawns as though bored by her surroundings.
Tom tries to interest the others in a book called The Rise of the Colored Empires by a man named Goddard. The book espouses racist, white-supremacist attitudes that Tom seems to find convincing. Daisy teases Tom about the book but is interrupted when Tom leaves the room to take a phone call. Daisy follows him hurriedly, and Jordan tells Nick that the call is from Tom's lover in New York.
After an awkward dinner, the party breaks up. Jordan wants to go to bed because she has a golf tournament the next day. As Nick leaves, Tom and Daisy hint that they would like for him to take a romantic interest in Jordan.
When Nick arrives home, he sees Gatsby for the first time, a handsome young man standing on the lawn with his arms reaching out toward the dark water. Nick looks out at the water, but all he can see is a distant green light that might mark the end of a dock.
Halfway between West Egg and New York City sprawls a desolate plain, a gray valley where New York's ashes are dumped. The men who live here work at shoveling up the ashes. Overhead, two huge, blue, spectacle-rimmed eyes—the last vestige of an advertising gimmick by a long-vanished eye doctor—stare down from an enormous sign. These unblinking eyes, the eyes of Doctor T. J. Eckleburg, watch over everything that happens in the valley of ashes.

… social grace and highly critical of Daisy's habit of visiting Gatsby's house alone. He is suspicious, but he has not yet discovered Gatsby and Daisy's love.
The following Saturday night, Tom and Daisy go to a party at Gatsby's house. Though Tom has no interest in the party, his dislike for Gatsby causes him to want to keep an eye on Daisy. Gatsby's party strikes Nick much more unfavorably this time…
… muses that, in some ways, this story is a story of the West even though it has taken place entirely on the East Coast. Nick, Jordan, Tom, and Daisy are all from west of the Appalachians, and Nick believes that the reactions of each, himself included, to living the fast-paced, lurid lifestyle of the East has shaped his or her behavior. Nick remembers life in the Midwest, full of snow, trains, and…
… have looked like to the explorers who discovered the New World centuries before. He imagines that America was once a goal for dreamers and explorers, just as Daisy was for Gatsby. He pictures the green land of America as the green light shining from Daisy's dock, and muses that Gatsby—whose wealth and success so closely echo the American dream—failed to realize that the dream had already ended, that…
… advantage of his host's money. As soon as Gatsby dies, Klipspringer disappears—he does not attend the funeral, but he does call Nick about a pair of tennis shoes that he left at Gatsby's mansion.
Themes, Motifs & Symbols
Themes
The Decline of the American Dream in the 1920s
On the surface, The Great Gatsby is a story of the thwarted love between a man and a woman. The main theme of the novel, however, encompasses a much larger, less romantic scope. Though all of its action takes place over a mere few months during the summer of 1922 and is set in a circumscribed geographical area in the vicinity of Long Island, New York, The Great Gatsby is a highly symbolic meditation on 1920s America as a whole, in particular the disintegration of the American dream in an era of unprecedented prosperity and material…
… stretching his arms out to the water and realizes that the green light he saw was the light at the end of Daisy's dock. According to Jordan, Gatsby has asked her to convince Nick to arrange a reunion between Gatsby and Daisy. Because he is terrified that Daisy will refuse to see him, Gatsby wants Nick to invite Daisy to tea. Without Daisy's knowledge, Gatsby intends to come to the tea at Nick's house as…
… have looked to early settlers of the new nation.
The Valley of Ashes
First introduced in Chapter II, the valley of ashes between West Egg and New York City consists of a long stretch of desolate land created by the dumping of industrial ashes. It represents the moral and social decay that results from the uninhibited pursuit of wealth, as the rich indulge themselves with regard for nothing but their…
... zobacz całą notatkę 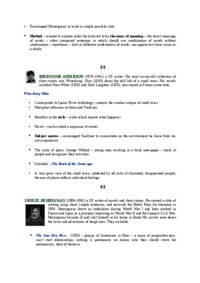 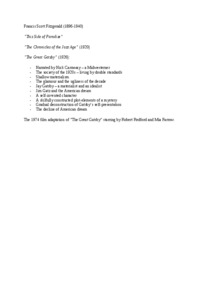 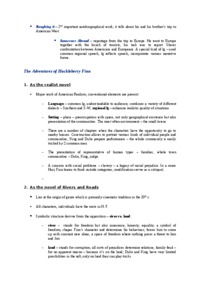