THE STUARTS (1603-1714)
Mary Stuart's son - James VI of Scotland became James I of England. He was holding two crowns - personal union between England and Scotland. Not political! Countries had separate parliaments. Political union was set later, in 1707. James descended from Henry VII.
James I
Charles I Charles II
James II
William III of Orange
Queen Anne
JAMES I
He was successful in Scotland, not in England. Extreme Protestant.
1605 - Roman Catholics (who failed to gain religious toleration) wanted to set Gunpowder Plot. Leader of the plot was Guy Fawkes. They set barrels into House of Commons and wanted to blow the house up. Plot ended up with failure, because of mysterious letter. Plotters were caught. More acts against Roman Catholics. Today on 5th November (Guy Fawkes Night) English people make effigies (kukły) of Guy Fawkes and burn them. Another persecuted religious group were puritans. They were extreme Protestants and they didn't like the church of England, because they claimed there are too many Catholic ideas left in the church of England. James didn't like them - he didn't trust them. He decided they should be eliminated. Puritans were afraid so they decided to go to North America, on ship Mayflower. They founded New Plymouth, Massachusets - New England. They were called Pilgrim Fathers. Colonisation of Ulster by Protestant English and Scottish plantation of Ulster (under Henry VIII). Irish Catholic were expelled by (wypędzeni) Protestant English. Irish people were treated really badly.
James I believed in “Divine Right of the King” and quarrelled with parliament about it. He strongly believed that monarch were deputy (zastępca) of God, and should be obeyed without any criticism (absolute power). Charles I also didn't want to share jurisdiction with parliament.
King could decide about religion, foreign policy, king's private issues

… - 1639
Second 1640
Charles I couldn't get help from parliament during war. He was able to put together only a small unexperienced army. He agreed to accept Scottish political freedom. He also agreed to pay them money so they returned home - but he didn't have the money. Therefore he needed a parliament.
THE ENGLISH CIVIL WAR (1642-49)
James and Parliament quarrelled who should control the army against Ireland. They were afraid that Charles wanted to control the army because he was planning to use the army against parliament. They couldn't trust him, he favoured Catholic church.
1642 - mistake: James tried to arrest 5 MPs -> by this he proved he couldn't be trusted. Civil War broke out - The Puritan Revolution.
Charles moved to Nottingham (London locked its gates) and gathered an army.
Two opposing…
… monarchy. Parliament agreed to pay debts left by Elisabeth. Instead they insisted the right to discuss home and foreign policy. James I became really angry.
CRISIS JAMES I vs. COMMONS
1621 - Marriage of James I's son to Spanish infant (girl was Catholic - House of Commons feared). Parliament opposed with a petition:
Their privileges were not the gift of the Crown, but of the English people
Marriages were…
... zobacz całą notatkę 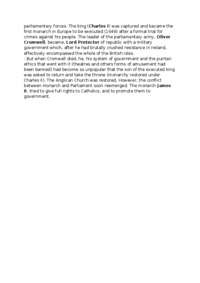