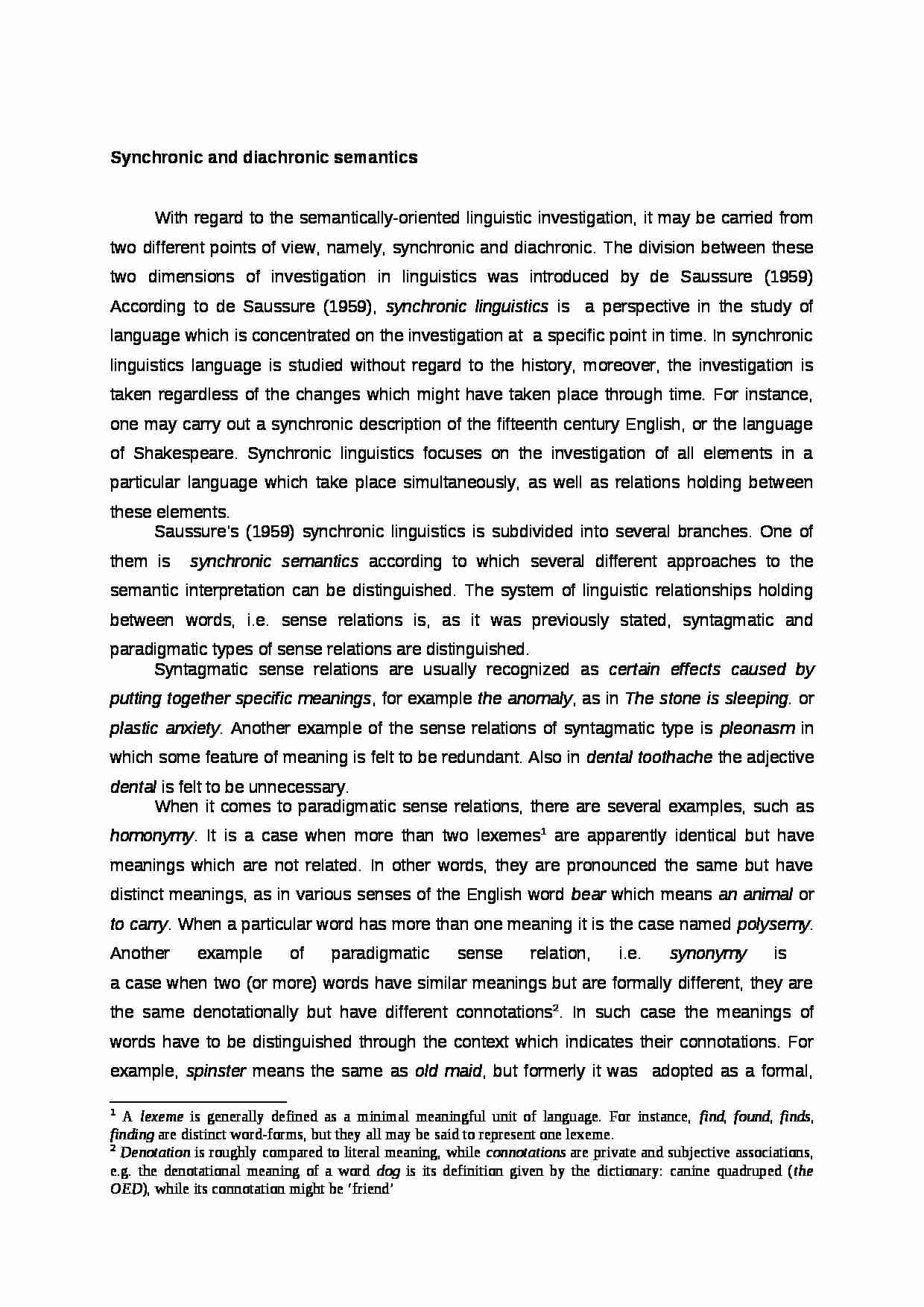 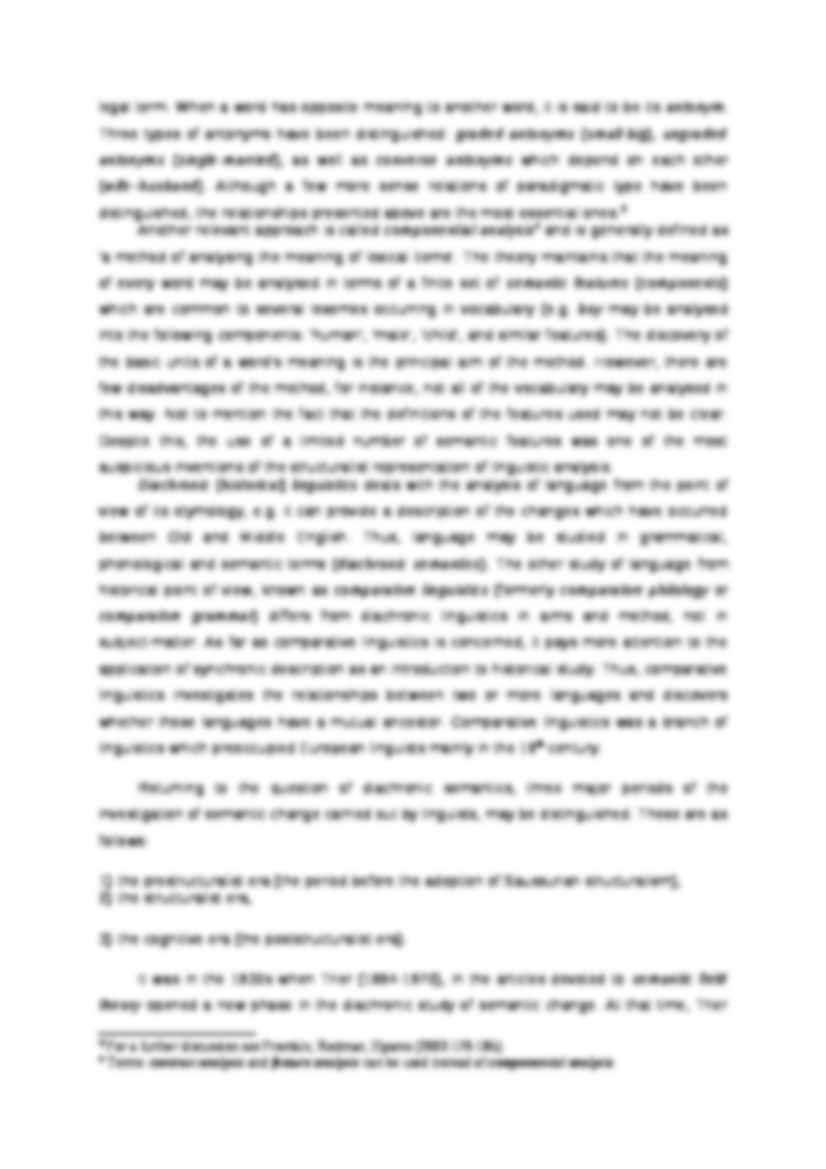 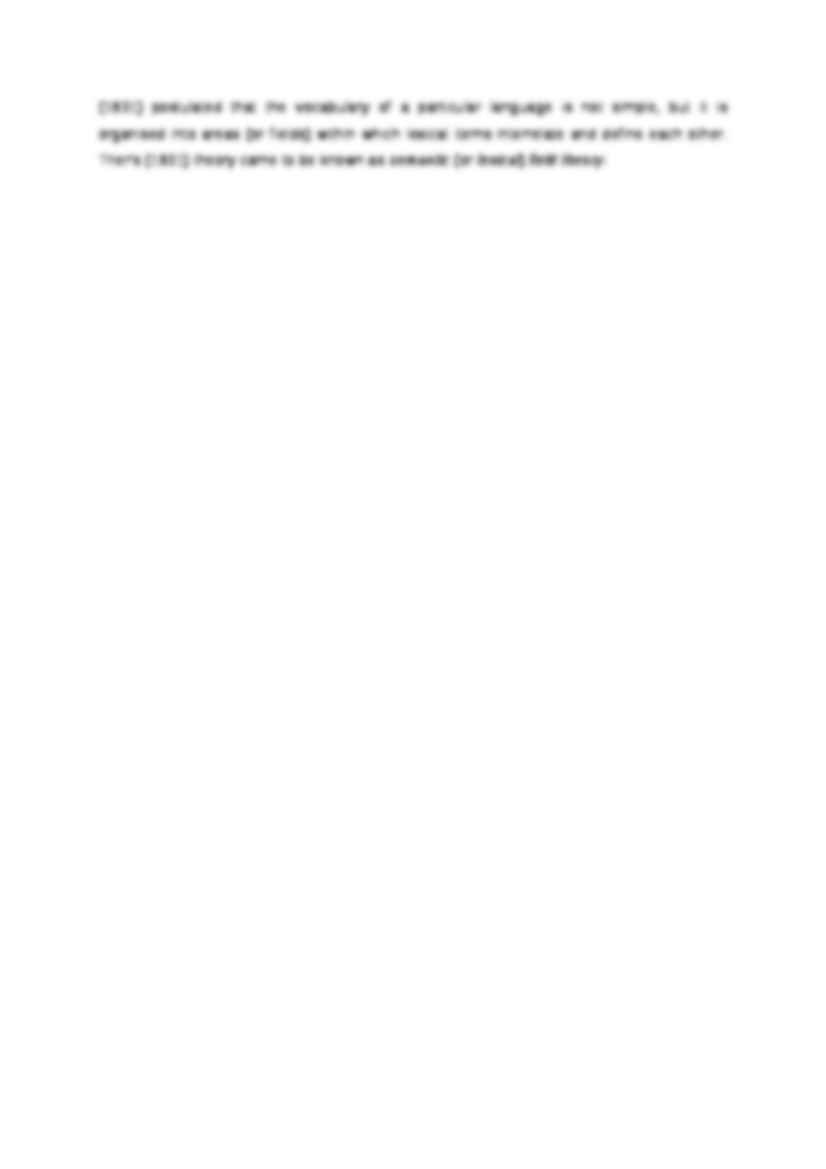 Synchronic and diachronic semantics
With regard to the semantically-oriented linguistic investigation, it may be carried from two different points of view, namely, synchronic and diachronic. The division between these two dimensions of investigation in linguistics was introduced by de Saussure (1959) According to de Saussure (1959), synchronic linguistics is a perspective in the study of language which is concentrated on the investigation at a specific point in time. In synchronic linguistics language is studied without regard to the history, moreover, the investigation is taken regardless of the changes which might have taken place through time. For instance, one may carry out a synchronic description of the fifteenth century English, or the language of Shakespeare. Synchronic linguistics focuses on the investigation of all elements in a particular language which take place simultaneously, as well as relations holding between these elements.
Saussure's (1959) synchronic linguistics is subdivided into several branches. One of them is synchronic semantics according to which several different approaches to the semantic interpretation can be distinguished. The system of linguistic relationships holding between words, i.e. sense relations is, as it was previously stated, syntagmatic and paradigmatic types of sense relations are distinguished. Syntagmatic sense relations are usually recognized as certain effects caused by putting together specific meanings, for example the anomaly, as in The stone is sleeping. or plastic anxiety. Another example of the sense relations of syntagmatic type is pleonasm in which some feature of meaning is felt to be redundant. Also in dental toothache the adjective dental is felt to be unnecessary. When it comes to paradigmatic sense relations, there are several examples, such as homonymy. It is a case when more than two lexemes are apparently identical but have meanings which are not related. In other words, they are pronounced the same but have distinct meanings, as in various senses of the English word bear which means an animal or to carry. When a particular word has more than one meaning it is the case named polysemy. Another example of paradigmatic sense relation, i.e. synonymy is a case when two (or more) words have similar meanings but are formally different, they are the same denotationally but have different connotations. In such case the meanings of words have to be distinguished through the context which indicates their connotations. For example, spinster means the same as old maid, but formerly it was adopted as a formal, legal term. When a word has opposite meaning to another word, it is said to be its antonym. Three types of antonyms have been distinguished: graded antonyms (small-big), ungraded antonyms (single-married), as well as converse antonyms which depend on each other (wife-husband). Although a few more sense relations of paradigmatic type have been distinguished, the relationships presented above are the most essential ones.

… dictionary: canine quadruped (the OED), while its connotation might be `friend' For a further discussion see Fromkin, Rodman, Hyams (2003:179-185).
Terms: contrast analysis and feature analysis can be used instead of componential analysis.
…
... zobacz całą notatkę 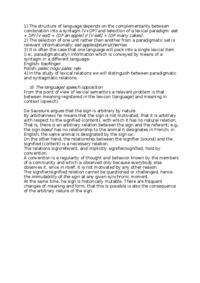 Approaches to the study in the field of semantics 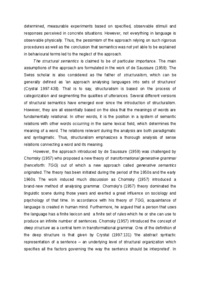 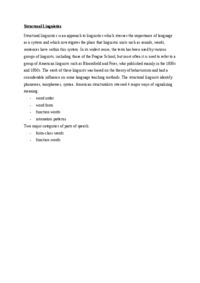