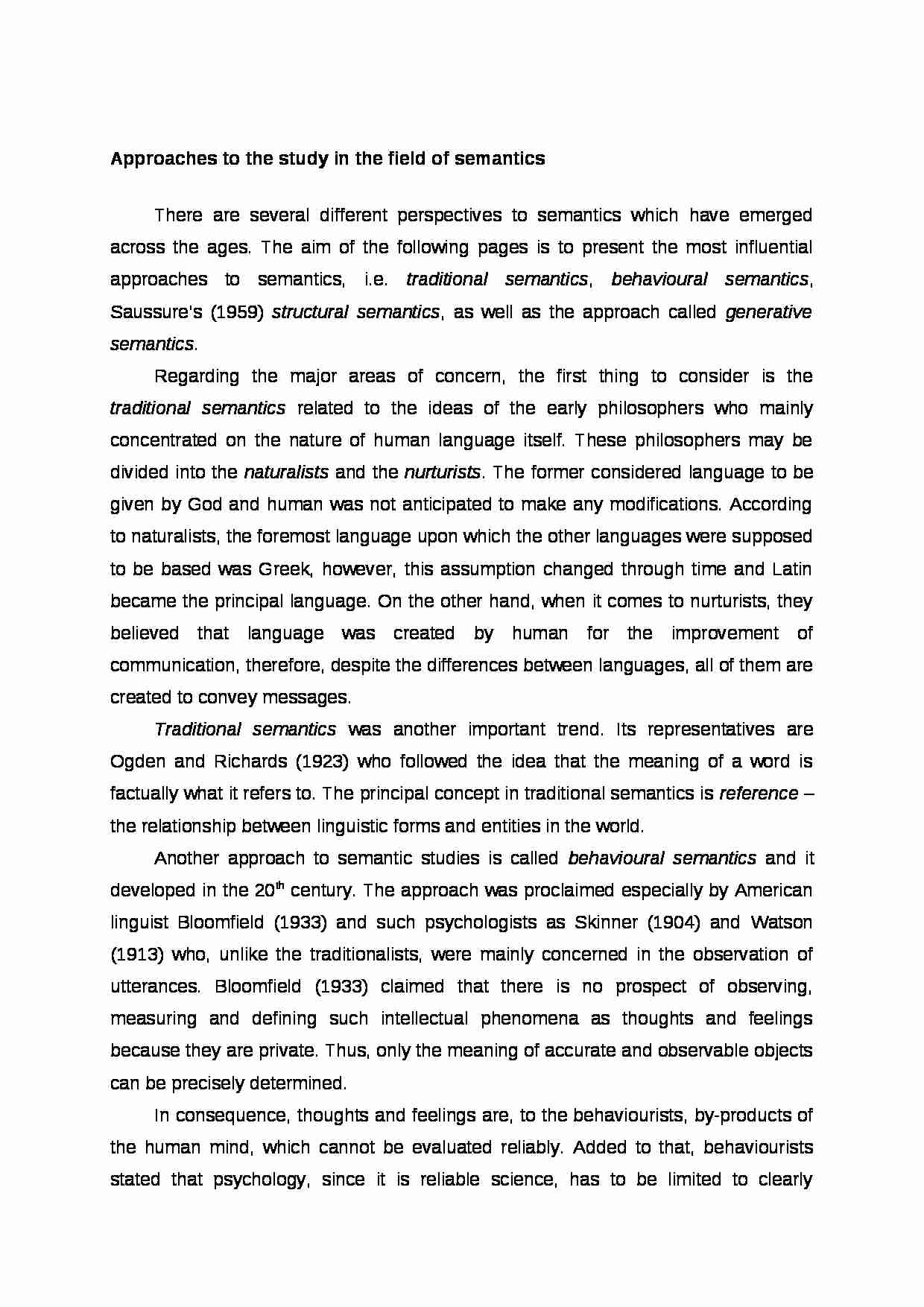 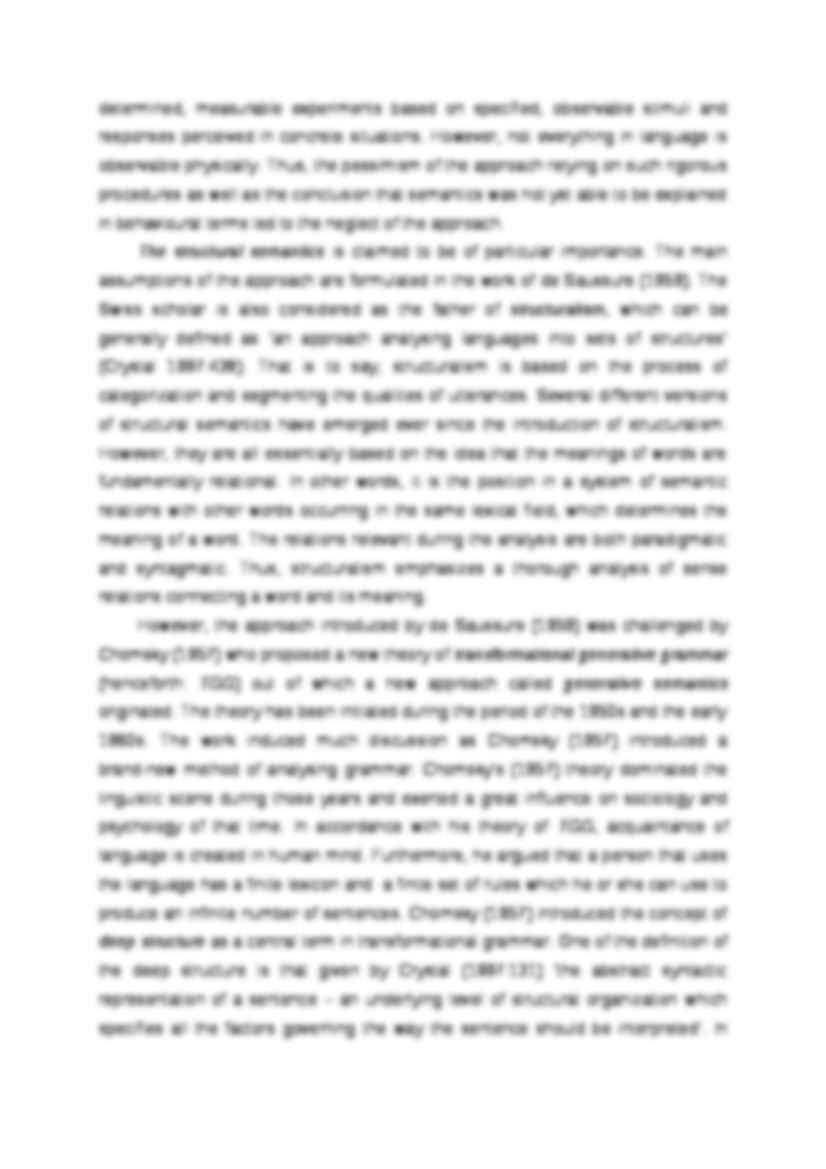 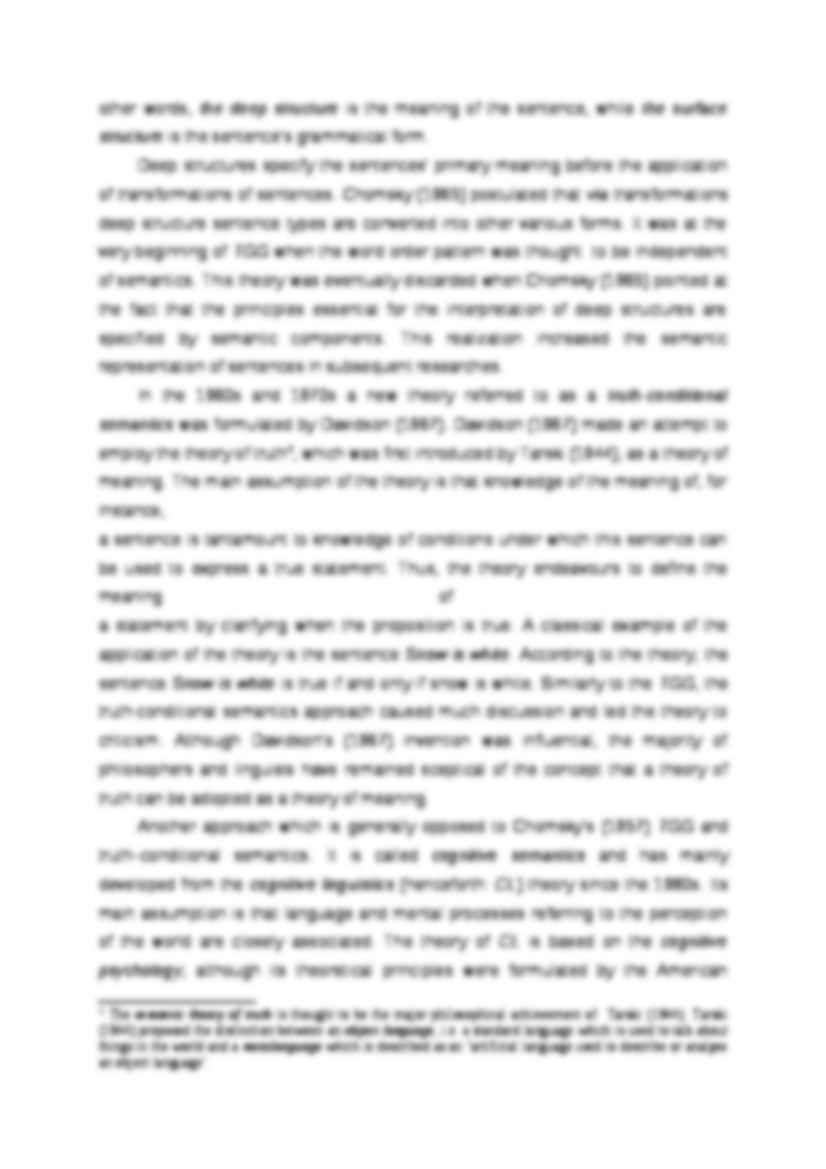 Approaches to the study in the field of semantics There are several different perspectives to semantics which have emerged across the ages. The aim of the following pages is to present the most influential approaches to semantics, i.e. traditional semantics, behavioural semantics, Saussure's (1959) structural semantics, as well as the approach called generative semantics.
Regarding the major areas of concern, the first thing to consider is the traditional semantics related to the ideas of the early philosophers who mainly concentrated on the nature of human language itself. These philosophers may be divided into the naturalists and the nurturists. The former considered language to be given by God and human was not anticipated to make any modifications. According to naturalists, the foremost language upon which the other languages were supposed to be based was Greek, however, this assumption changed through time and Latin became the principal language. On the other hand, when it comes to nurturists, they believed that language was created by human for the improvement of communication, therefore, despite the differences between languages, all of them are created to convey messages.
Traditional semantics was another important trend. Its representatives are Ogden and Richards (1923) who followed the idea that the meaning of a word is factually what it refers to. The principal concept in traditional semantics is reference - the relationship between linguistic forms and entities in the world.
Another approach to semantic studies is called behavioural semantics and it developed in the 20th century. The approach was proclaimed especially by American linguist Bloomfield (1933) and such psychologists as Skinner (1904) and Watson (1913) who, unlike the traditionalists, were mainly concerned in the observation of utterances. Bloomfield (1933) claimed that there is no prospect of observing, measuring and defining such intellectual phenomena as thoughts and feelings because they are private. Thus, only the meaning of accurate and observable objects can be precisely determined.
In consequence, thoughts and feelings are, to the behaviourists, by-products of the human mind, which cannot be evaluated reliably. Added to that, behaviourists stated that psychology, since it is reliable science, has to be limited to clearly determined, measurable experiments based on specified, observable stimuli and responses perceived in concrete situations. However, not everything in language is observable physically. Thus, the pessimism of the approach relying on such rigorous procedures as well as the conclusion that semantics was not yet able to be explained in behavioural terms led to the neglect of the approach. The structural semantics is claimed to be of particular importance. The main assumptions of the approach are formulated in the work of de Saussure (1959). The Swiss scholar is also considered as the father of ... zobacz całą notatkę 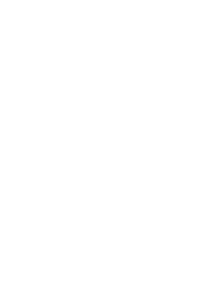 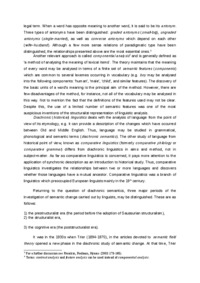 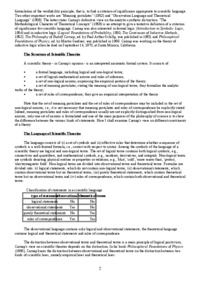