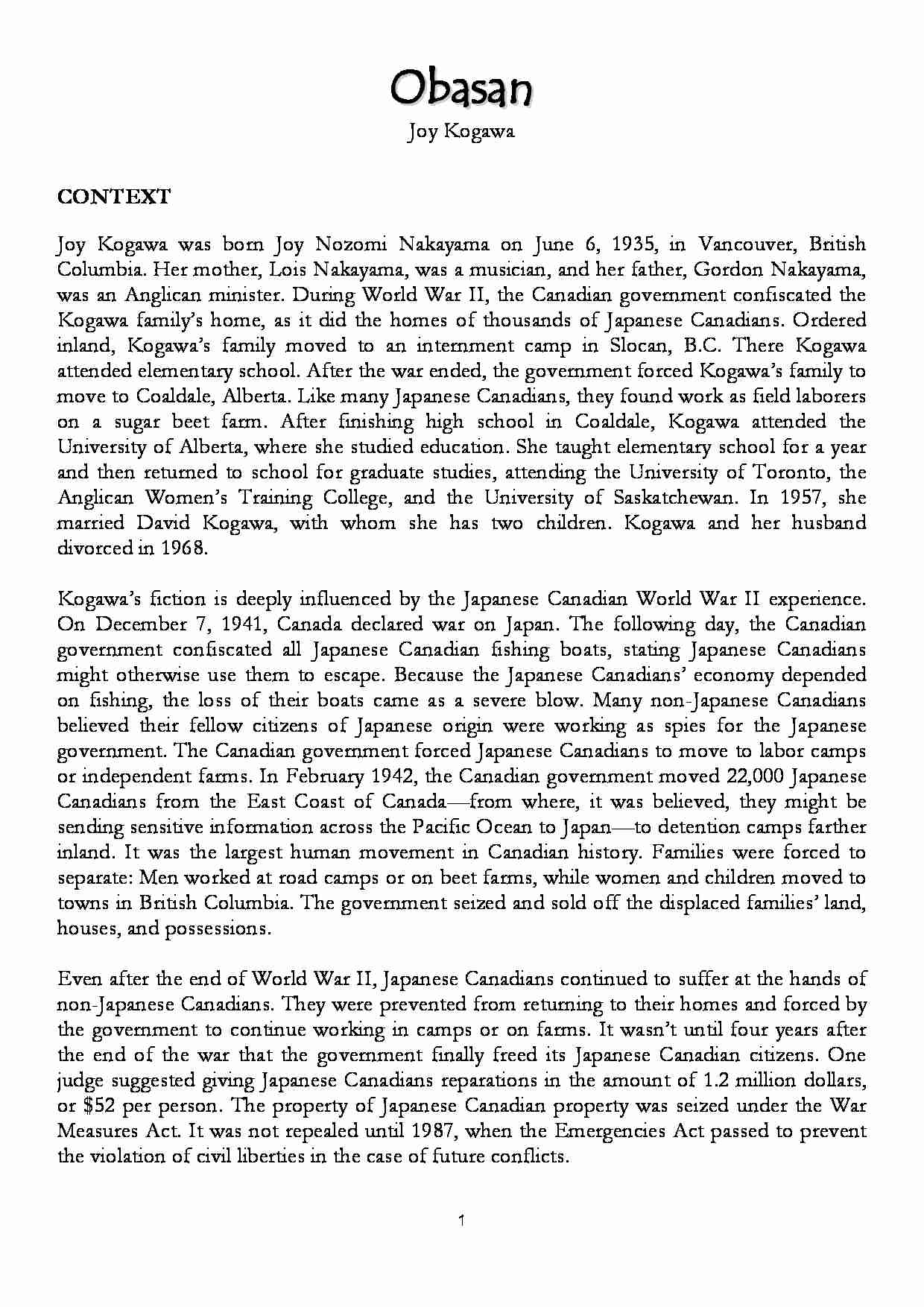 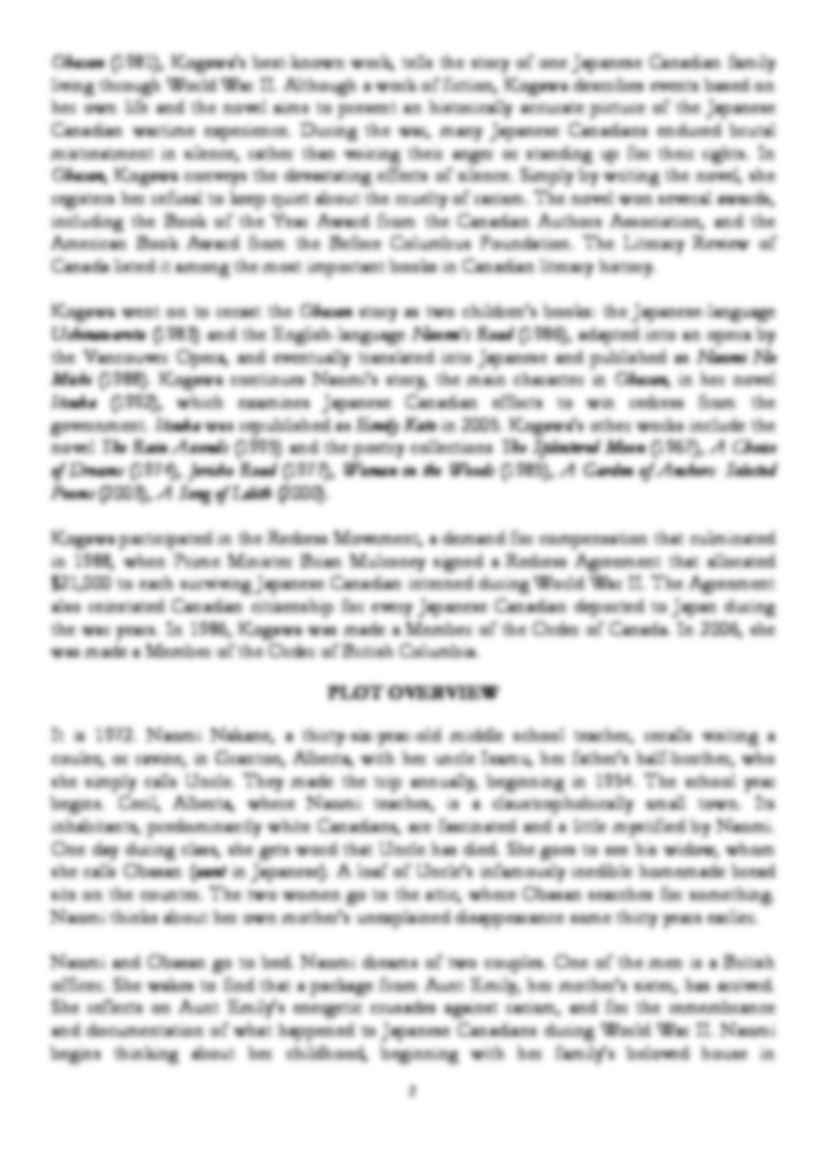 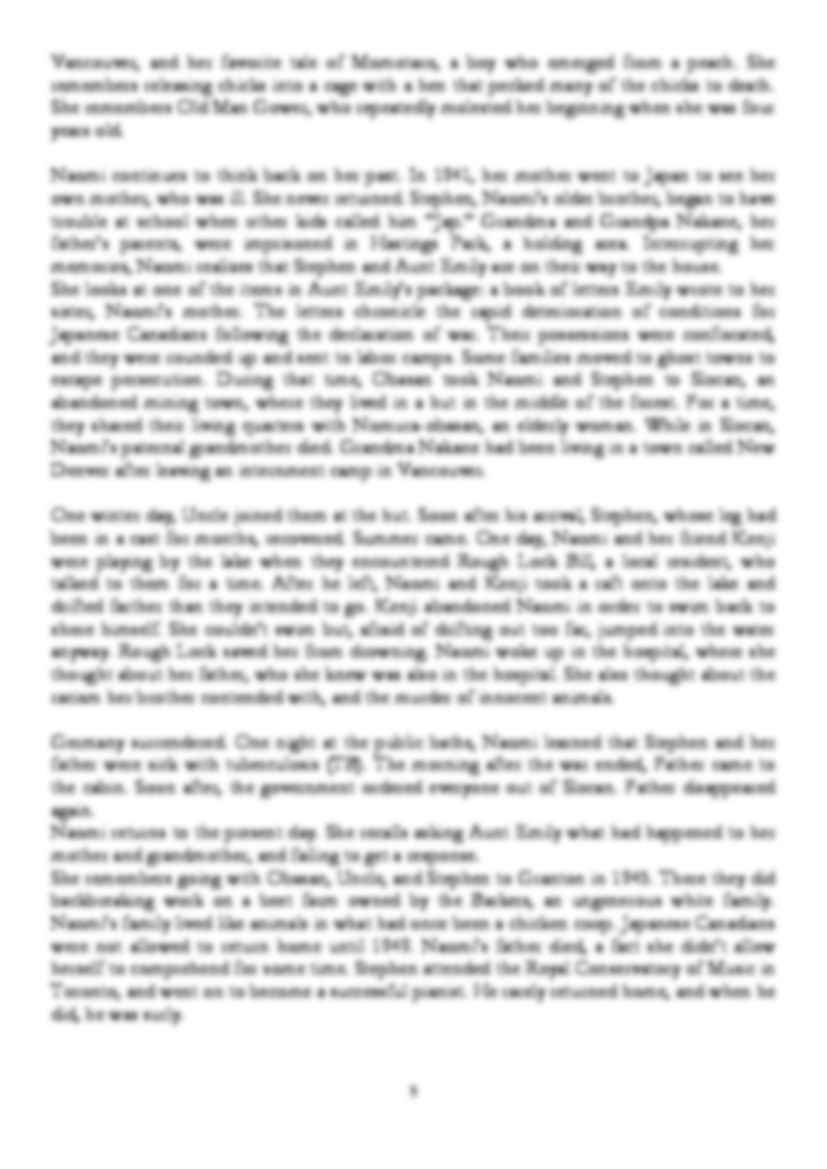 Obasan (1981), Kogawa’s best-known work, tells the story of one Japanese Canadian family living through World War II. Although a work of fiction, Kogawa describes events based on her own life and the novel aims to present an historically accurate picture of the Japanese Canadian wartime experience. During the war, many Japanese Canadians endured brutal mistreatment in silence, rather than voicing their anger or standing up for their rights. In Obasan, Kogawa conveys the devastating effects of silence. Simply by writing the novel, she registers her refusal to keep quiet about the cruelty of racism. The novel won several awards, including the Book of the Year Award from the Canadian Authors Association, and the American Book Award from the Before Columbus Foundation. The Literary Review of Canada listed it among the most important books in Canadian literary history.

Kogawa went on to recast the Obasan story as two children’s books: the Japanese-language Ushinawareta (1983) and the English-language Naomi’s Road (1986), adapted into an opera by the Vancouver Opera, and eventually translated into Japanese and published as Naomi No Michi (1988). Kogawa continues Naomi’s story, the main character in Obasan, in her novel Itsuka (1992), which examines Japanese Canadian efforts to win redress from the government. Itsuka was republished as Emily Kato in 2005. Kogawa’s other works include the novel The Rain Ascends (1995) and the poetry collections The Splintered Moon (1967), A Choice of Dreams (1974), Jericho Road (1977), Woman in the Woods (1985), A Garden of Anchors: Selected Poems (2003), A Song of Lilith (2000).

It is 1972. Naomi Nakane, a thirty-six-year-old middle school teacher, recalls visiting a coulee, or ravine, in Granton, Alberta, with her uncle Isamu, her fatheds half-brother, who she simply calls Uncle. They made the trip annually, beginning in 1954. The school year begins. Cecil, Alberta, where Naomi teaches, is a claustrophobically small town. Its inhabitants, predominantly white Canadians, are fascinated and a little mystified by Naomi. One day during class, she gets word that Uncle has died. She goes to see his widow, whom she calls Obasan (aunt in Japanese). A loaf of Uncle’s infamously inedible homemade bread sits on the counter. The two women go to the attic, where Obasan searches for something. Naomi thinks about her own mothePs unexplained disappearance some thirty years earlier.

Naomi and Obasan go to bed. Naomi dreams of two couples. One of the men is a British officer. She wakes to find that a package from Aunt Emily, her mothePs sister, has arrived. She reflects on Aunt Emily’s energetic crusades against racism, and for the remembrance and documentation of what happened to Japanese Canadians during World War II. Naomi begins thinking about her childhood, beginning with her family’s beloved house in Vancouver, and her favorite tale of Momotaro, a boy who emerged from a peach. She remembers releasing chicks into a cage with a hen that pecked many of the chicks to death. She remembers Old Man Gower, who repeatedly molested her beginning when she was four years old.

Naomi continues to think back on her past. In 1941, her mother went to Japan to see her own mother, who was ill. She never returned. Stephen, Naomi’s older brother, began to have trouble at school when other kids called him “Jap.” Grandma and Grandpa Nakane, her fatheds parents, were imprisoned in Hastings Park, a holding area. Interrupting her memories, Naomi realizes that Stephen and Aunt Emily are on their way to the house.

She looks at one of the items in Aunt Emily’s package: a book of letters Emily wrote to her sister, Naomi’s mother. The letters chronicle the rapid deterioration of conditions for Japanese Canadians following the declaration of war. Their possessions were confiscated, and they were rounded up and sent to labor camps. Some families moved to ghost towns to escape persecution. During that time, Obasan took Naomi and Stephen to Slocan, an abandoned mining town, where they lived in a hut in the middle of the forest. For a time, they shared their living quarters with Nomura-obasan, an elderly woman. While in Slocan, Naomi’s paternal grandmother died. Grandma Nakane had been living in a town called New Denver after leaving an internment camp in Vancouver.

One winter day, Uncle joined them at the hut. Soon after his arrival, Stephen, whose leg had been in a cast for months, recovered. Summer came. One day, Naomi and her friend Kenji were playing by the lake when they encountered Rough Lock Bill, a local resident, who talked to them for a time. After he left, Naomi and Kenji took a raft onto the lake and drifted farther than they intended to go. Kenji abandoned Naomi in order to swim back to shore himself. She couldn’t swim but, afraid of drifting out too far, jumped into the water anyway. Rough Lock saved her from drowning. Naomi woke up in the hospital, where she thought about her father, who she knew was also in the hospital. She also thought about the racism her brother contended with, and the murder of innocent animals.

Germany surrendered. One night at the public baths, Naomi learned that Stephen and her father were sick with tuberculosis (TB). The morning after the war ended, Father came to the cabin. Soon after, the government ordered everyone out of Slocan. Father disappeared again.

Naomi returns to the present day. She recalls asking Aunt Emily what had happened to her mother and grandmother, and failing to get a response.

She remembers going with Obasan, Uncle, and Stephen to Granton in 1945. There they did backbreaking work on a beet farm owned by the Barkers, an ungenerous white family. Naomi’s family lived like animals in what had once been a chicken coop. Japanese Canadians were not allowed to return home until 1949. Naomi’s father died, a fact she didn’t allow herself to comprehend for some time. Stephen attended the Royal Conservatory of Music in Toronto, and went on to become a successful pianist. He rarely returned home, and when he did, he was surly. 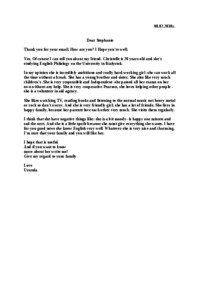 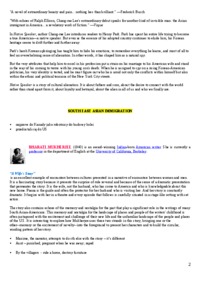 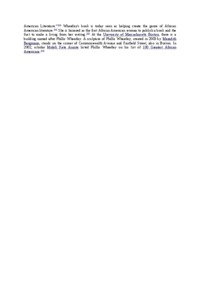