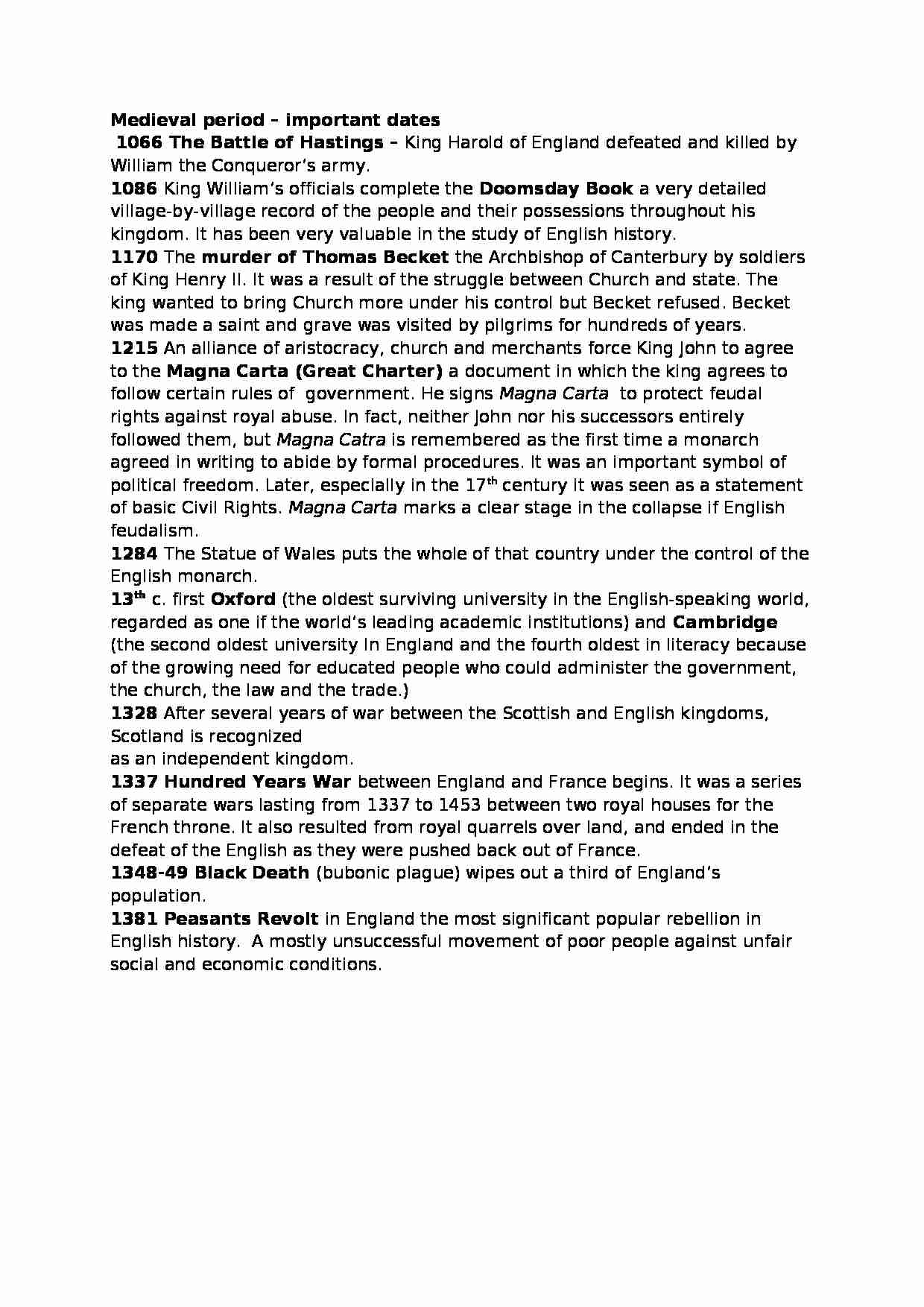 Medieval period - important dates 1066 The Battle of Hastings - King Harold of England defeated and killed by William the Conqueror's army. 1086 King William's officials complete the Doomsday Book a very detailed village-by-village record of the people and their possessions throughout his kingdom. It has been very valuable in the study of English history. 1170 The murder of Thomas Becket the Archbishop of Canterbury by soldiers of King Henry II. It was a result of the struggle between Church and state. The king wanted to bring Church more under his control but Becket refused. Becket was made a saint and grave was visited by pilgrims for hundreds of years. 1215 An alliance of aristocracy, church and merchants force King John to agree to the Magna Carta (Great Charter) a document in which the king agrees to follow certain rules of government. He signs Magna Carta to protect feudal rights against royal abuse. In fact, neither John nor his successors entirely followed them, but Magna Catra is remembered as the first time a monarch agreed in writing to abide by formal procedures. It was an important symbol of political freedom. Later, especially in the 17th century it was seen as a statement of basic Civil Rights. Magna Carta marks a clear stage in the collapse if English feudalism. 1284 The Statue of Wales puts the whole of that country under the control of the English monarch. 13th c. first Oxford (the oldest surviving university in the English-speaking world, regarded as one if the world's leading academic institutions) and Cambridge (the second oldest university In England and the fourth oldest in literacy because of the growing need for educated people who could administer the government, the church, the law and the trade.) 1328 After several years of war between the Scottish and English kingdoms, Scotland is recognized as an independent kingdom. 1337 Hundred Years War between England and France begins. It was a series of separate wars lasting from 1337 to 1453 between two royal houses for the French throne. It also resulted from royal quarrels over land, and ended in the defeat of the English as they were pushed back out of France. 1348-49 Black Death (bubonic plague) wipes out a third of England's population. 1381 Peasants Revolt in England the most significant popular rebellion in English history. A mostly unsuccessful movement of poor people against unfair social and economic conditions. ... zobacz całą notatkę

Dates from the 17th century England 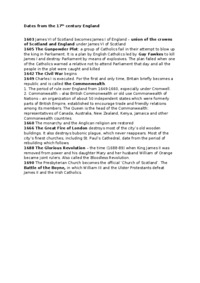