… the King of France. By this agreement France and Spain would be united and more powerful, which was dangerous. Britain, Portugal and The Netherlands opposed (fights took place also in USA - called “Queen Anne's War”).
Treaty of Utrecht (1714) - British Empire larger. They gained territories around Hudson's Bay, Gibraltar, Minorca (till 1802), monopoly of the South America slave track.
The Peace of…
… Islands, Mauritius, New South Wales, Malta, Gold Coast, Trinidad, Tobago and in 1842 - Hong Kong Island (till 1997).
AFRICA: end of 18th century - begin of exploration of Africa. Why did they come there? To preach gospel, to heal the sick fight, slave trade.
David Livingston - he drew a map of South and Central Africa. It occurred that this is scramble for Africa (bogactwa) - it attracted France, Britain…
... zobacz całą notatkę 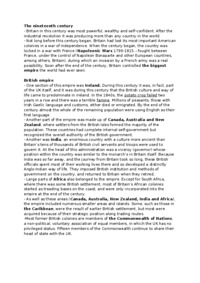 The nineteenth century-dates from the period 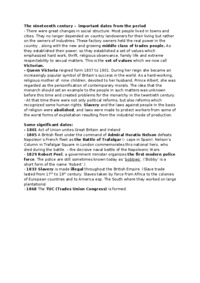