The environment in the BSR and sustainable development
(sources of pollution, environmental policy and organizations, HELCOM)
In the days of old, when transport by land was very expensive, the Baltic sea was the main unifying force of the region.
the Baltic Sea has become a common responsibility because of the vulnerability of its brackish waters as a recipient of increasing amounts of pollution originating from human economic activity.
Until about 1960, the Baltic Sea was considered as being in a rather healthy condition, but this has changed dramatically since then concurrently with high economic growth rates in the bordering countries and huge increases in energy production, industrial output, transportation, waste disposal and the agricultural use of fertilizers and pesticides. Today, life is threatened in the Baltic Sea, and parts of it, e.g. in the inner Danish waters and in the Riga Bay, are almost dead. In the 1990s the environmental pressure was lifted somewhat because of the decline in production in the eastern parts of the region and more recently due to improved environmental policies and investments.
from the late 1980s, Poland contributed 33% of the total nitrogen pollution, the Soviet Union 25% and Denmark, Sweden and Finland together 39%. Concerning phosphorus, the contributions were 39% from Poland, 25% from the Soviet Union, and 31% from Denmark, Sweden and Finland
This refers to pollution via rivers, from urban areas and from industries.
For nitrogen another 25% should be added originating from the air and from the production of algae in the Baltic Sea itself.
Entirely new ecological disturbances have been actively created by the construction of a combined tunnel and bridge for railway and highway transport between Malmo and Copenhagen across the Sound, completed in 2000.
Transnational pollution
Due to the prevailing western winds, Norway and Sweden are net importers of pollution, whereas Denmark, Finland, the Baltic states and Poland are net exporters of pollution. Most of the exchange of pollution involves areas other than Scandinavia and the Baltic region. Among the first consequences of marketization in Eastern Europe were imports of hazardous waste in Poland and the Soviet Union.
According to Greenpeace the main offenders of waste dumped such as used tyres, radioactive residues, pesticides and dust from steel mills are Germany, Austria and Sweden.
3. Resources, environment and economic growth
two basic human values, which have always threatened the environment and mankind itself, namely the desire to live well and the desire to proliferate
competition for resources and markets is likely to intensify in the global economic environment, in which the eastern countries in the Baltic region attempt to recover from economic depression and to reach a standard of living comparable to that of the Nordic countries

… comparable to that of the Nordic countries
The resource base is relatively important for the Nordic economies, where renewable resources include fish stocks, hydroelectric power in Norway and Sweden, and forests in Norway, Sweden and Finland. There are also considerable exhaustible resources including oil in the Norwegian and Danish parts of the North Sea and mineral resources in Sweden. Poland has considerable deposits of coal. In the Baltic countries the main natural resources consist of agricultural lands and fresh water resources, but in addition there are large deposits of oil-shale and some other mineral resources in Estonia, and in all three Baltic countries there are forests, peat and also hydroelectric power resources.
Changes in energy consumption and carbon dioxide emissions largely follow…
… policies. Restructuring towards a larger share of services in output tends to reduce energy consumption and pollution; economic accounting under market conditions will improve resource efficiency; privatization of production and resource ownership may change the conditions for environmental policies; and aspirations for EU membership will induce more ambitious policies in order to comply with EU…
…
Cultural sustainability
Ecological sustainability
Economic sustainability
The process and projects undertaken must give the gratest output possible and benefits of such a development are distributed between the generations.
Social sustainability
Development should make people control their lives. Social groups should take part in decision making.
Cultural sustainability
Universal values like tolerance…
... zobacz całą notatkę

Geographical and natural determinants of the Baltic Sea Region 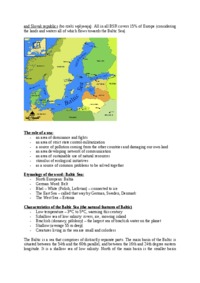 Process of institutionalization in the BSR 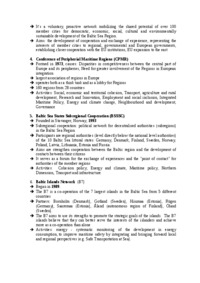 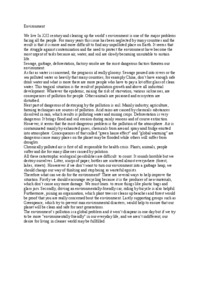