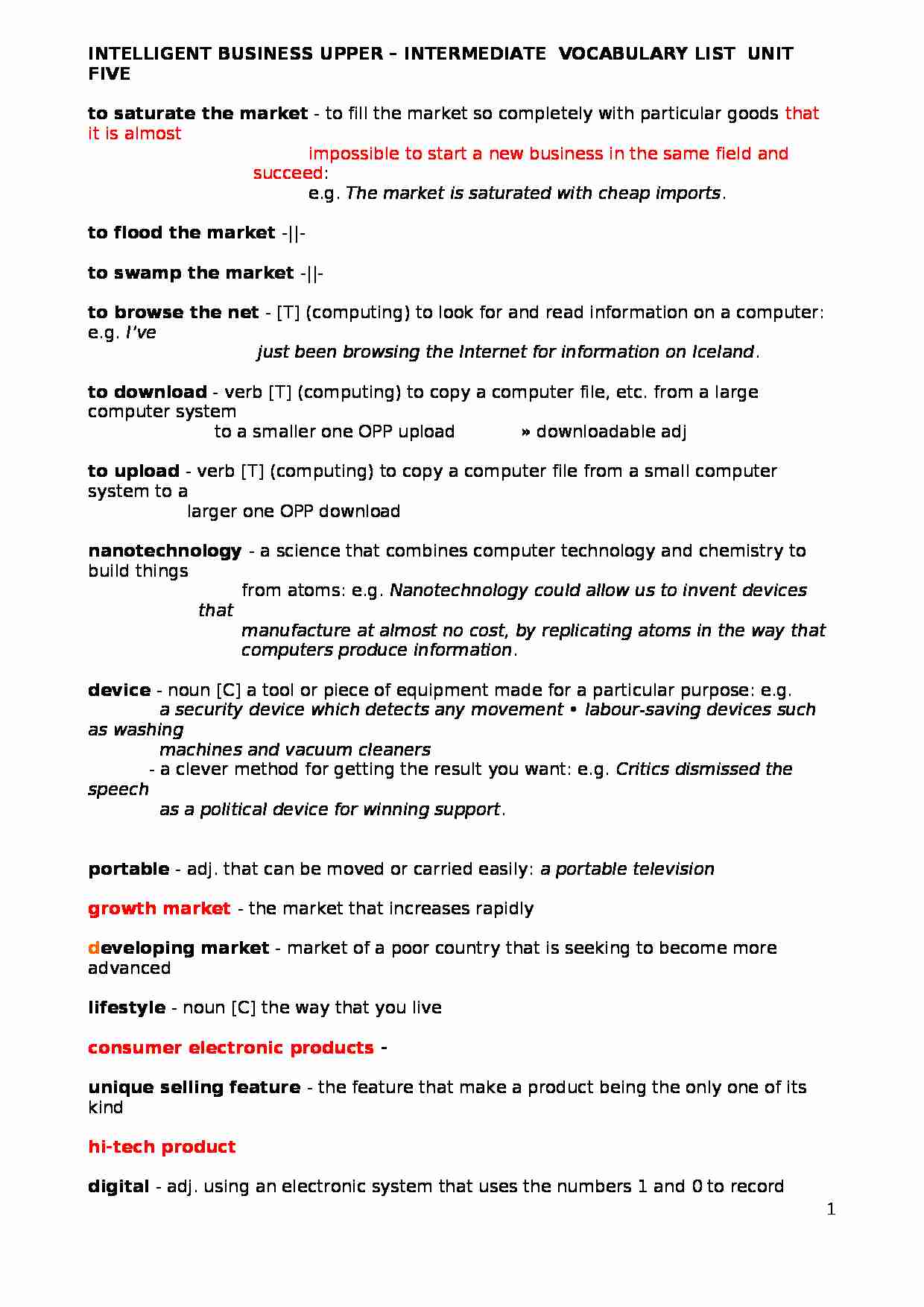 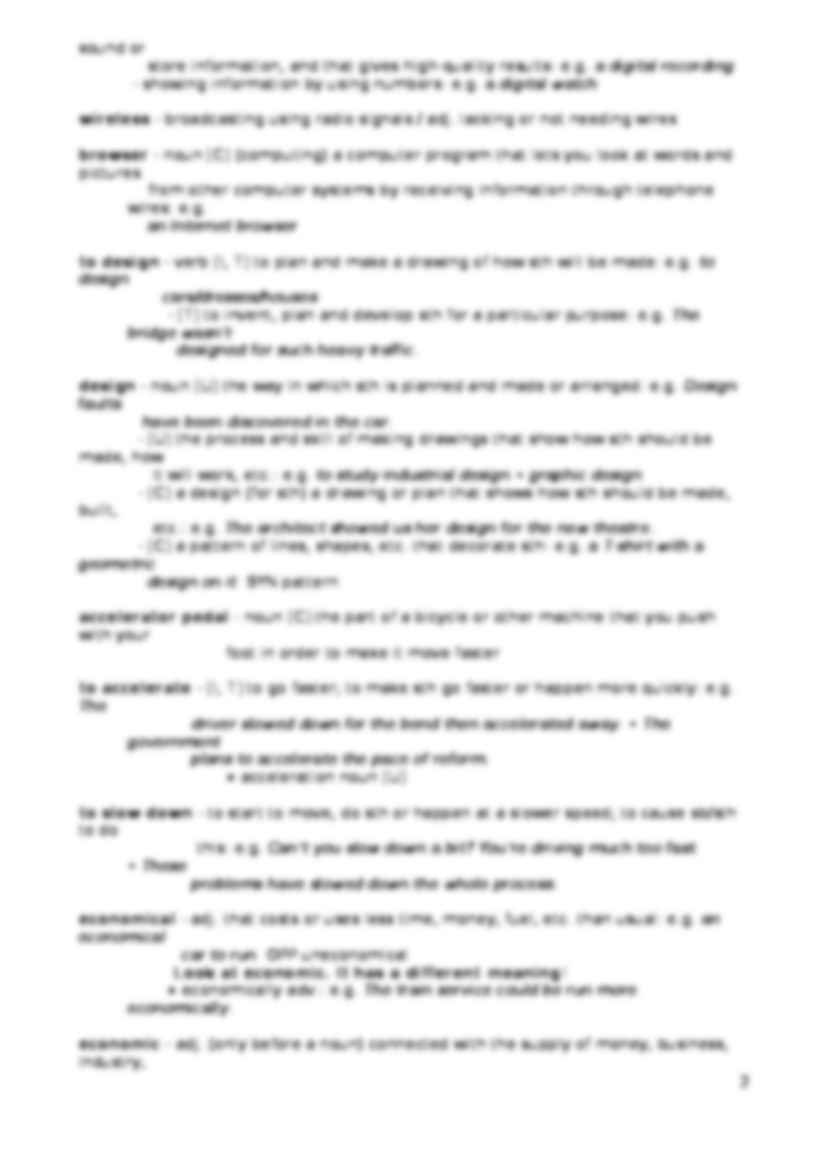 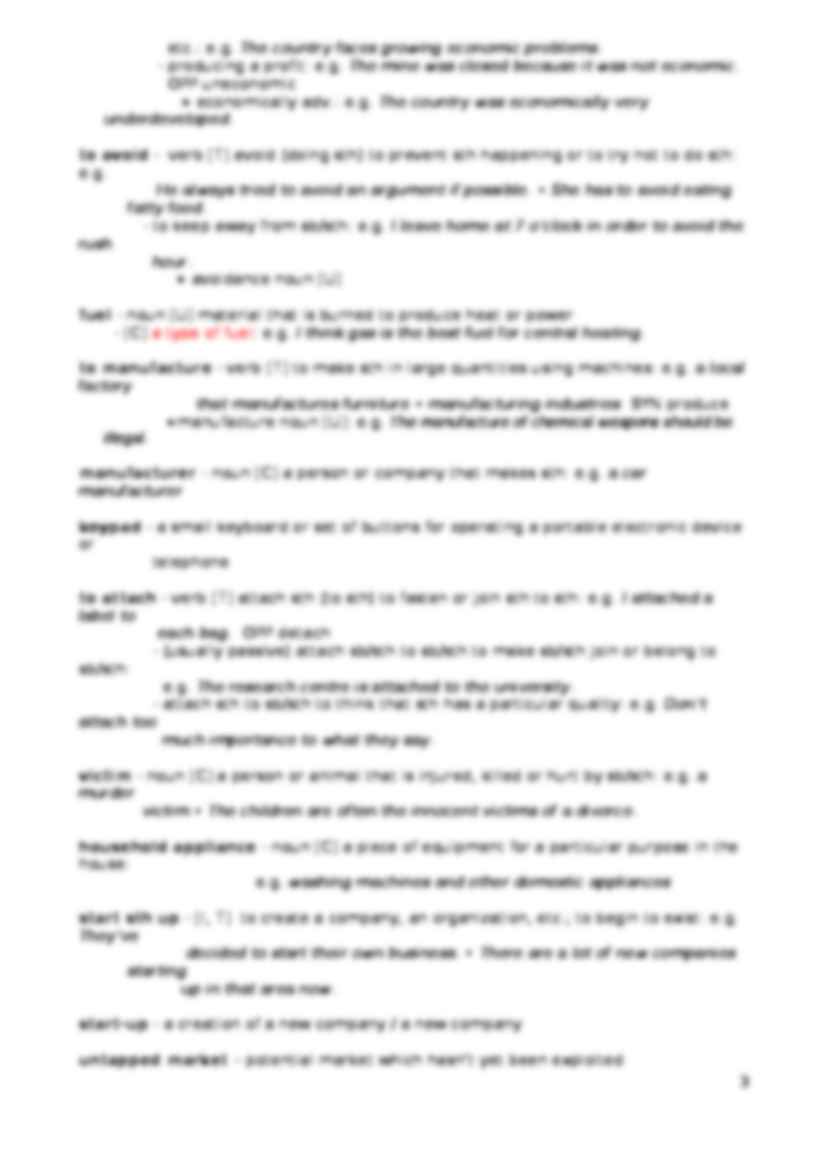 INTELLIGENT BUSINESS UPPER - INTERMEDIATE VOCABULARY LIST UNIT FIVE to saturate the market - to fill the market so completely with particular goods that it is almost impossible to start a new business in the same field and succeed : e.g. The market is saturated with cheap imports .
to flood the market -||- to swamp the market -||- to browse the net - [T] (computing) to look for and read information on a computer: e.g. I've just been browsing the Internet for information on Iceland .
to download - verb [T] (computing) to copy a computer file, etc. from a large computer system to a smaller one OPP upload » downloadable adj
to upload - verb [T] (computing) to copy a computer file from a small computer system to a larger one OPP download
nanotechnology - a science that combines computer technology and chemistry to build things
from atoms: e.g. Nanotechnology could allow us to invent devices that manufacture at almost no cost, by replicating atoms in the way that computers produce information .
device - noun [C] a tool or piece of equipment made for a particular purpose: e.g.
a security device which detects any movement • labour-saving devices such as washing machines and vacuum cleaners - a clever method for getting the result you want: e.g. Critics dismissed the speech as a political device for winning support .
portable - adj. that can be moved or carried easily: a portable television growth market - the market that increases rapidly d eveloping market - market of a poor country that is seeking to become more advanced lifestyle - noun [C] the way that you live
consumer electronic products - unique selling feature - the feature that make a product being the only one of its kind hi-tech product digital - adj. using an electronic system that uses the numbers 1 and 0 to record sound or store information, and that gives high-quality results: e.g. a digital recording - showing information by using numbers: e.g. a digital watch wireless - broadcasting using radio signals / adj. lacking or not needing wires browser - noun [C] (computing) a computer program that lets you look at words and pictures from other computer systems by receiving information through telephone wires: e.g.

….
OPP uneconomic
» economically adv.: e.g. The country was economically very underdeveloped.
to avoid - verb [T] avoid (doing sth) to prevent sth happening or to try not to do sth: e.g. He always tried to avoid an argument if possible. • She has to avoid eating fatty food.
- to keep away from sb/sth: e.g. I leave home at 7 o'clock in order to avoid the rush hour.
» avoidance noun [U]
fuel - noun…
… extremely surprised
ridiculous - very silly or unreasonable: e.g. They're asking a ridiculous (= very high) price for that house.
» ridiculously adverb
widespread - adj. found or happening over a large area; affecting a large number of people:
e.g. The storm has caused widespread damage.
boom - verb [I] to grow very quickly in size or value: Business is booming in the computer industry.
- noun [C] a period…
… reliance
subscriber - noun a person who pays to receive a newspaper or magazine regularly or to use a particular service: e.g. subscribers to satellite and cable television, a telephone subscriber
infant - noun [C] a baby or very young child: e.g. There is a high rate of infant mortality (= many children die when they are still babies). • Mrs Davies teaches infants (= children aged between four and seven…
… sb about what he/she should do: e.g. She took her doctor's advice and gave up smoking. • Let me give you some advice …
NOTE  Advice is an uncountable noun, so we cannot say `an advice' or `some advices'. We can say: a piece of advice and: a lot of advice.
short-term - adj. lasting for a short period of time from the present: e.g. short-term plans/memory
results - noun [C] something that happens…
... zobacz całą notatkę 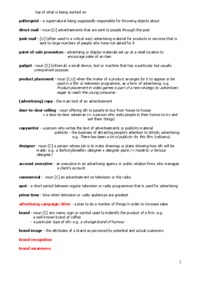 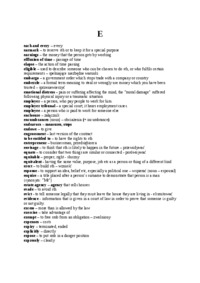 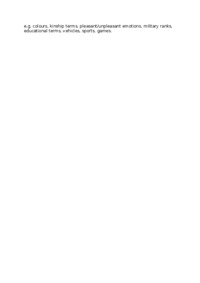