The first Europeans to reach North America were Icelandic Vikings, led by Leif Ericson, about the
year 1000. Traces of their visit have been found in the Canadian province of New Foundland, but
the Vikings failed to establish a permanent settlement and soon lost contact with the new continent.
Acting on behalf of the Spanish crown, in 1492, the Italian navigator Christopher Columbus sailed
west from Europe and landed on one of the Bahama Islands (San Salvador) in the Carribean Sea.
THE COLONIAL ERA
The first successful English colony was found at Jamestown, Virginia, in 1607.
A few years later, English Puritans came to America to escape religious persecution for their
opposition to the Church of England. In 1620, the Puritans founded the Plymouth Colony in what
later became Massachusetts. Plymouth was the second permanent British settlement in North
America and the first in New England.
Thanksgiving – observed annualy to commemorate the 1st harvest at Plymouth Colony in 1621,
when after a winter of suffering and starvation the Pilgrims celebrated their first year of survival in
the New World with a harvest feast and prayers of thanks to God.
New England is a region in the northeastern corner of the United States, bordered by the Atlantic
Ocean, Canada and the state of New York, consisting of 6 states: Maine, New Hampshire, Vermont,
Massachusetts, Rhode Island and Connecticut.
In 1636 an English clergyman named Roger Williams left Massachusetts and founded the colony of
Rhode Island, based on the principals of religious freedom and separation of church and state, two
ideals that were later adopted by framers of the US Constitution.
By 1733 English settlers had founded 13 colonies, along the Atlantic coast, from New Hampshire in
the north to Georgia in the south.
Elsewhere in North America, the French controlled Canada and Louisiana, which included the vast
Mississipi River watershed. France and England fought several wars during the 16th century with
North America being drawn into every one. The end of the Seven Years War in 1763 left England in
control of Canada and all of North America east of Mississipi.
Soon afterwards England and it's colonies were in conflict, because of the raising taxes, in part to
defray the cost of fighting the Seven Years War, and expected Americans to lodge British soldiers in
their homes. The colonists resented the taxes.
Stamp Act (1765)
All the taxes were, except one on tea, were removed, but in 1773 a group of patriots responded by
staging the Boston Tea Party. Disguised as Indians, the y boarded British merchant ships and
dumped 342 crates of tea into Boston Harbor.
Colonial leaders convened the First Continental Congress in 1774 to discuss the colonies opposition
to British rule.
War broke out on April 19, 1775 (Revolutionary War), when British soldiers confronted American
patriots led by Paul Revere and John Hancock. The main battles were in Lexington and Concord.
On July 4, 1776 the Continental Congress adopted ... zobacz całą notatkę 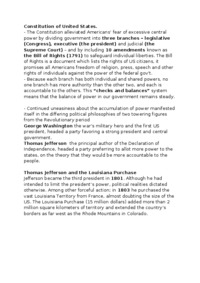 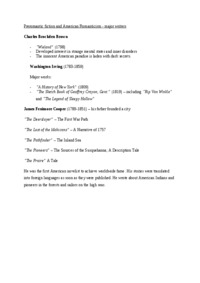