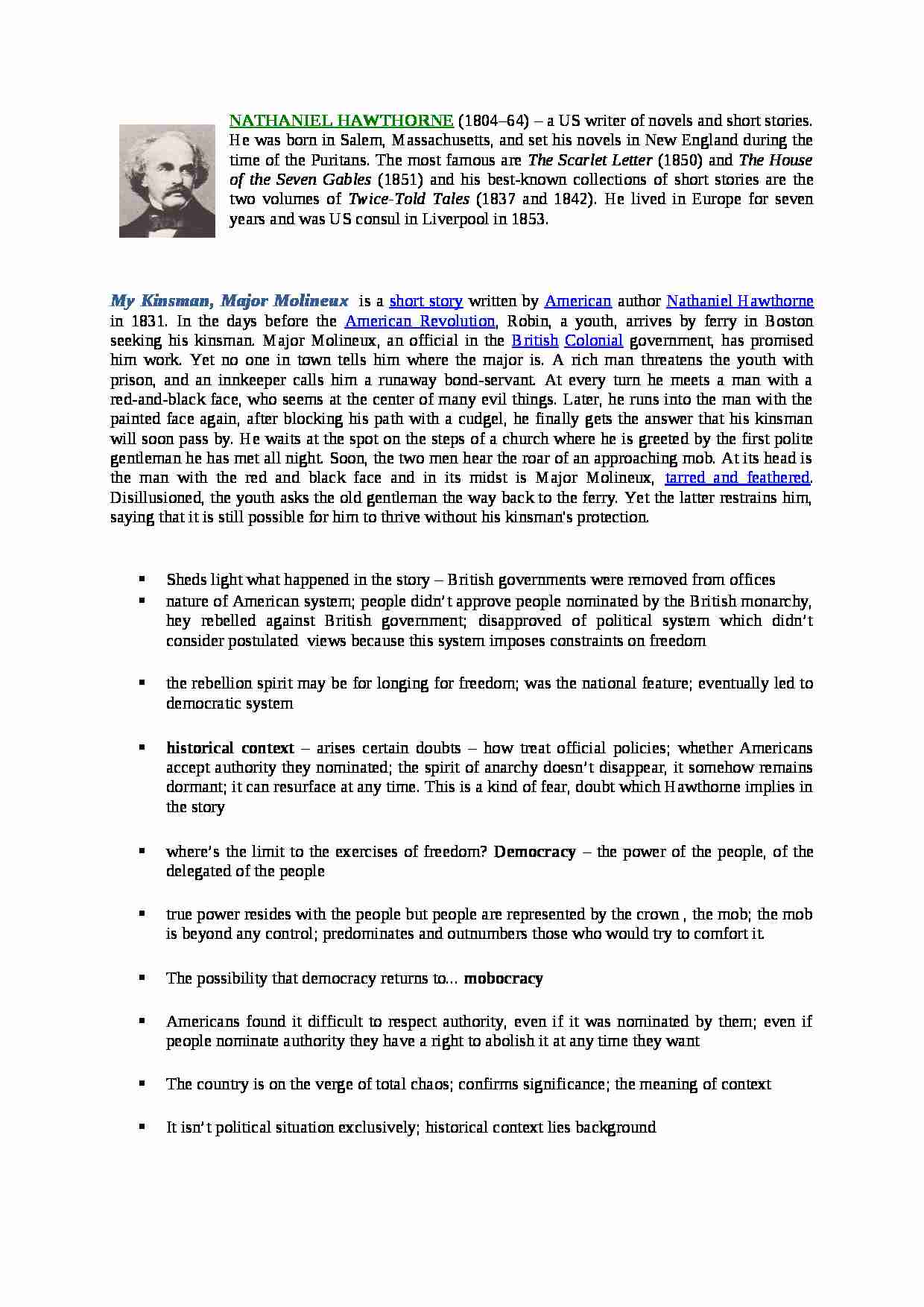 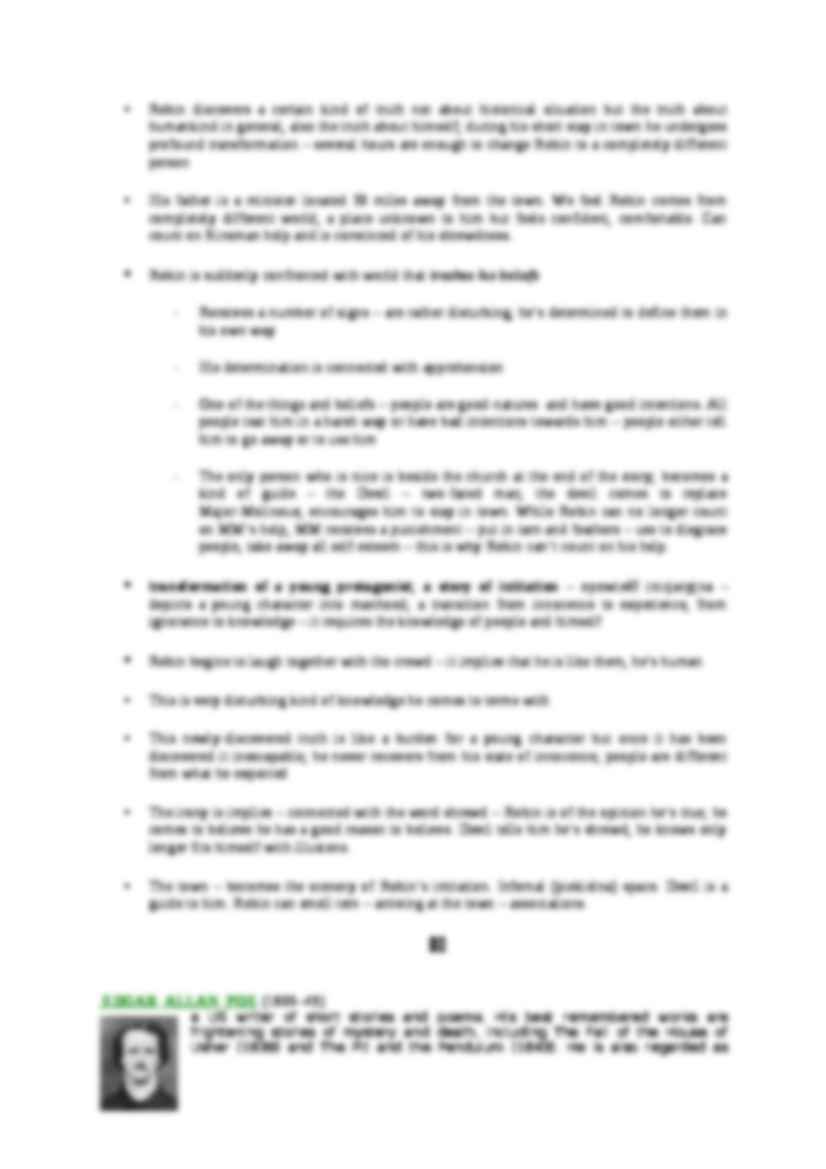 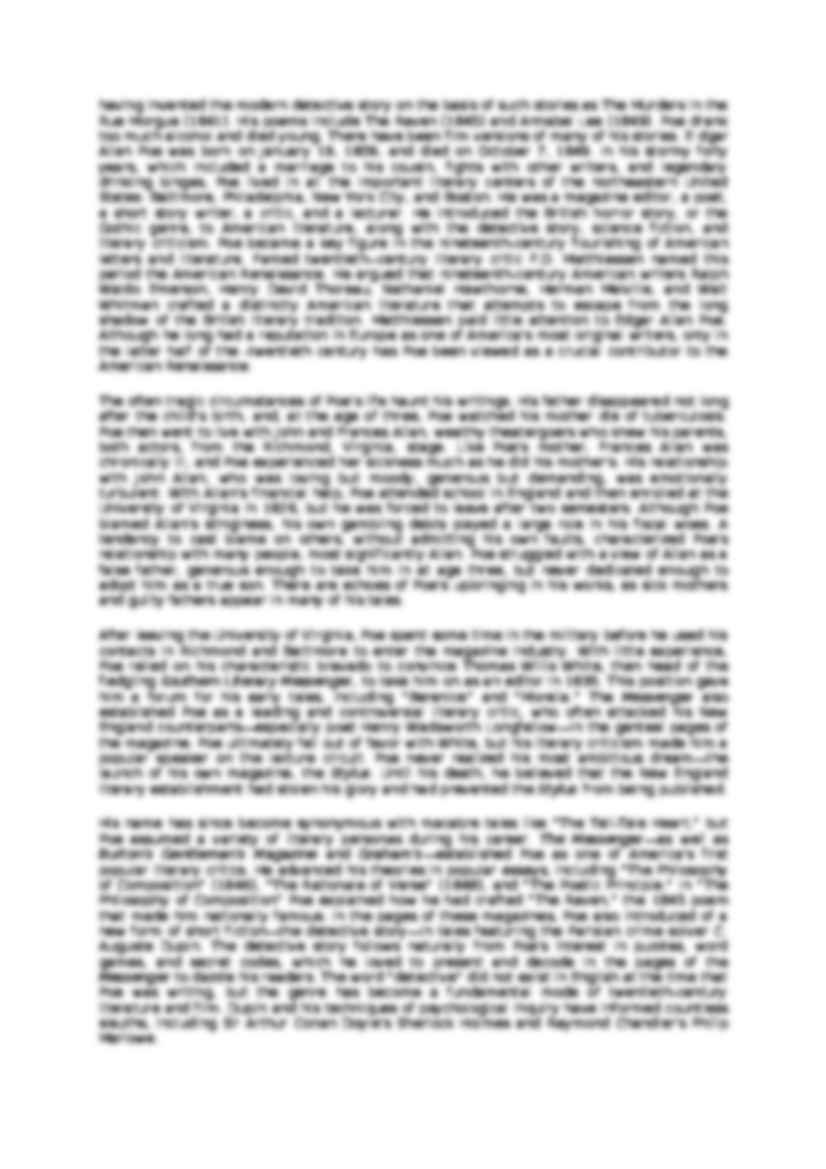 Nathaniel Hawthorne (1804-64) - a US writer of novels and short stories. He was born in Salem, Massachusetts, and set his novels in New England during the time of the Puritans. The most famous are The Scarlet Letter (1850) and The House of the Seven Gables (1851) and his best-known collections of short stories are the two volumes of Twice-Told Tales (1837 and 1842). He lived in Europe for seven years and was US consul in Liverpool in 1853.
My Kinsman, Major Molineux is a short story written by American author Nathaniel Hawthorne in 1831. In the days before the American Revolution, Robin, a youth, arrives by ferry in Boston seeking his kinsman. Major Molineux, an official in the British Colonial government, has promised him work. Yet no one in town tells him where the major is. A rich man threatens the youth with prison, and an innkeeper calls him a runaway bond-servant. At every turn he meets a man with a red-and-black face, who seems at the center of many evil things. Later, he runs into the man with the painted face again, after blocking his path with a cudgel, he finally gets the answer that his kinsman will soon pass by. He waits at the spot on the steps of a church where he is greeted by the first polite gentleman he has met all night. Soon, the two men hear the roar of an approaching mob. At its head is the man with the red and black face and in its midst is Major Molineux, tarred and feathered. Disillusioned, the youth asks the old gentleman the way back to the ferry. Yet the latter restrains him, saying that it is still possible for him to thrive without his kinsman's protection.
Sheds light what happened in the story - British governments were removed from offices
nature of American system; people didn't approve people nominated by the British monarchy, hey rebelled against British government; disapproved of political system which didn't consider postulated views because this system imposes constraints on freedom
the rebellion spirit may be for longing for freedom; was the national feature; eventually led to democratic system
historical context - arises certain doubts - how treat official policies; whether Americans accept authority they nominated; the spirit of anarchy doesn't disappear, it somehow remains dormant; it can resurface at any time. This is a kind of fear, doubt which Hawthorne implies in the story
where's the limit to the exercises of freedom? Democracy - the power of the people, of the delegated of the people
true power resides with the people but people are represented by the crown , the mob; the mob is beyond any control; predominates and outnumbers those who would try to comfort it.
The possibility that democracy returns to... mobocracy
Americans found it difficult to respect authority, even if it was nominated by them; even if people nominate authority they have a right to abolish it at any time they want

… criticism. Poe became a key figure in the nineteenth-century flourishing of American letters and literature. Famed twentieth--century literary critic F.O. Matthiessen named this period the American Renaissance. He argued that nineteenth-century American writers Ralph Waldo Emerson, Henry David Thoreau, Nathaniel Hawthorne, Herman Melville, and Walt Whitman crafted a distinctly American literature that attempts to escape from the long shadow of the British literary tradition. Matthiessen paid little attention to Edgar Allan Poe. Although he long had a reputation in Europe as one of America's most original writers, only in the latter half of the -twentieth century has Poe been viewed as a crucial contributor to the American Renaissance.
The often tragic circumstances of Poe's life haunt his writings. His…
… imitation. Infernal (piekielna) space. Devil is a guide to him. Robin can smell tern - arriving at the town - associations.
Edgar Allan Poe (1809-49) a US writer of short stories and poems. His best remembered works are frightening stories of mystery and death, including The Fall of the House of Usher (1839) and The Pit and the Pendulum (1843). He is also regarded as having invented the modern detective…
… short fiction—the detective story—in tales featuring the Parisian crime solver C. Auguste Dupin. The detective story follows naturally from Poe's interest in puzzles, word games, and secret codes, which he loved to present and decode in the pages of the Messenger to dazzle his readers. The word “detective” did not exist in English at the time that Poe was writing, but the genre has become a fundamental…
... zobacz całą notatkę 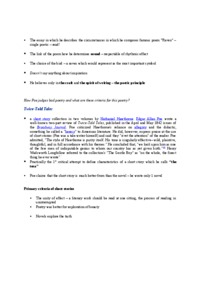 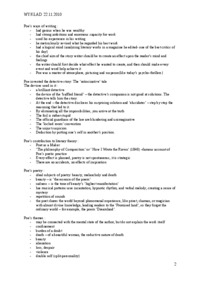 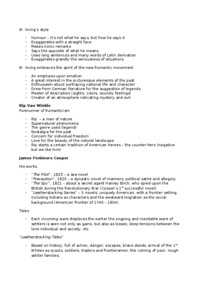