Generator matrix Any algebraically independent subset of k nonzero codewords uniquely defines an ( n , k ) linear code. Such subset consists a code-base, that can be considered as rows of the so called generator matrix:
To obtain all possible combinations of generator matrix rows, matrix G has to be multiplied by a matrix that contains all possible information words, including all-zero word:
Then,
and a single codeword,
, for simplicity of description, codeword index i is omitted. Normally, a code-base words are words with , ordered in such a way that an identity matrix appears at the left side of G :
where, is called an parity matrix. Such form of G is called the systematic form and the obtained code the systematic code . In such code, information bits are located at the left side of a codeword: Code not having this property is called the nonsystematic code .
... zobacz całą notatkę 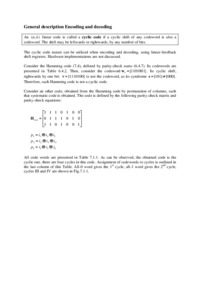 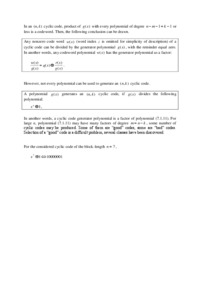 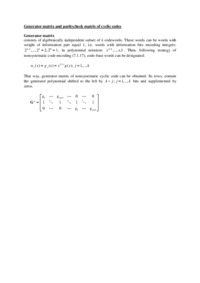