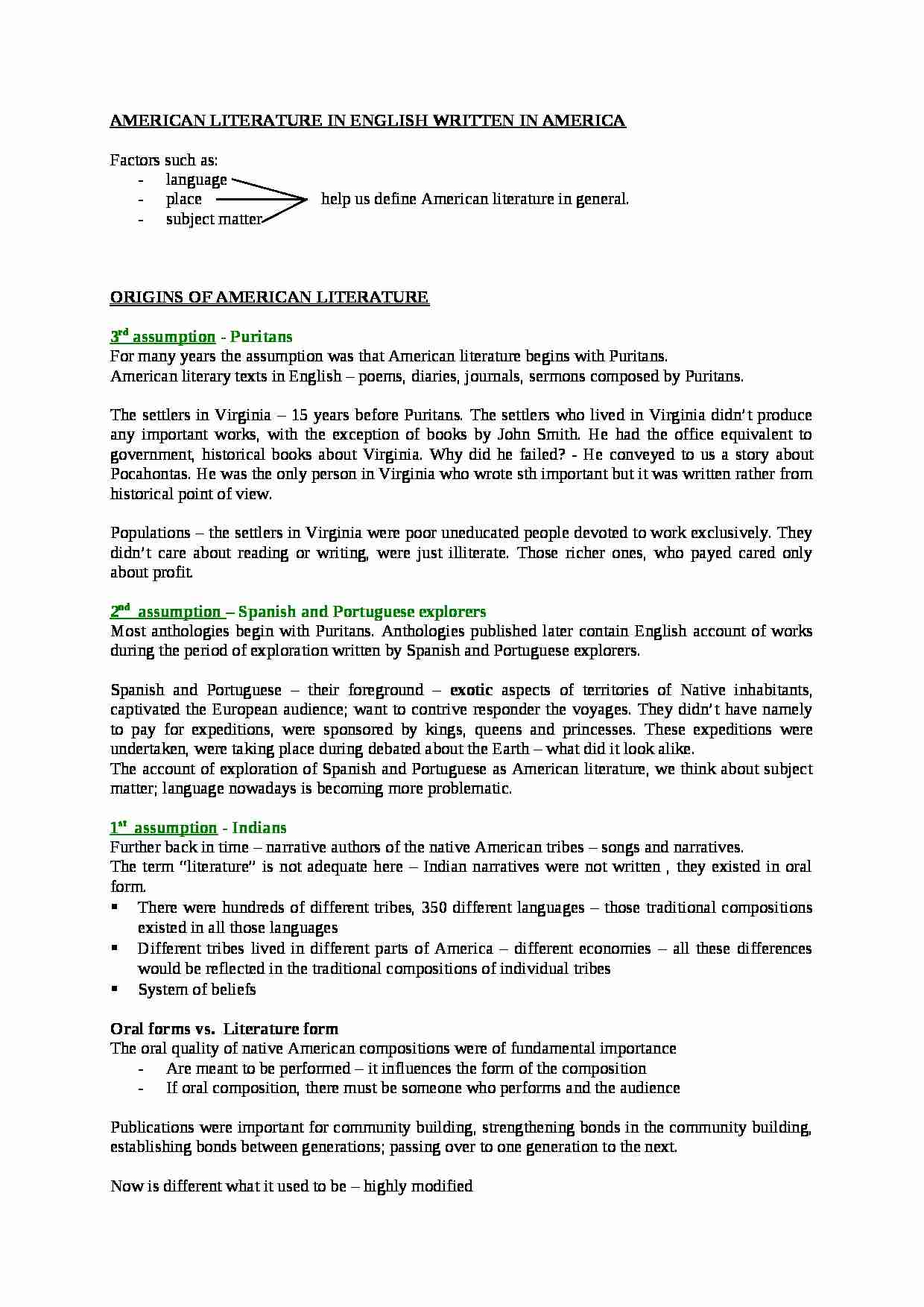 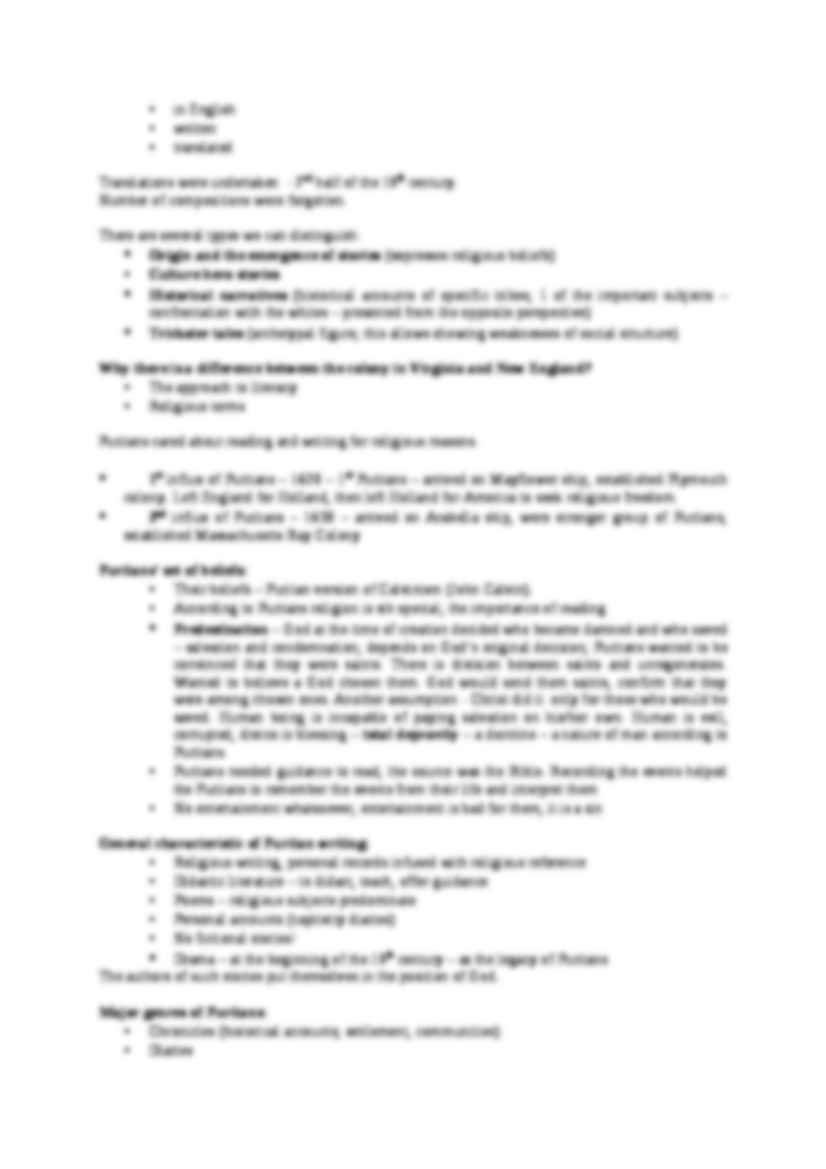 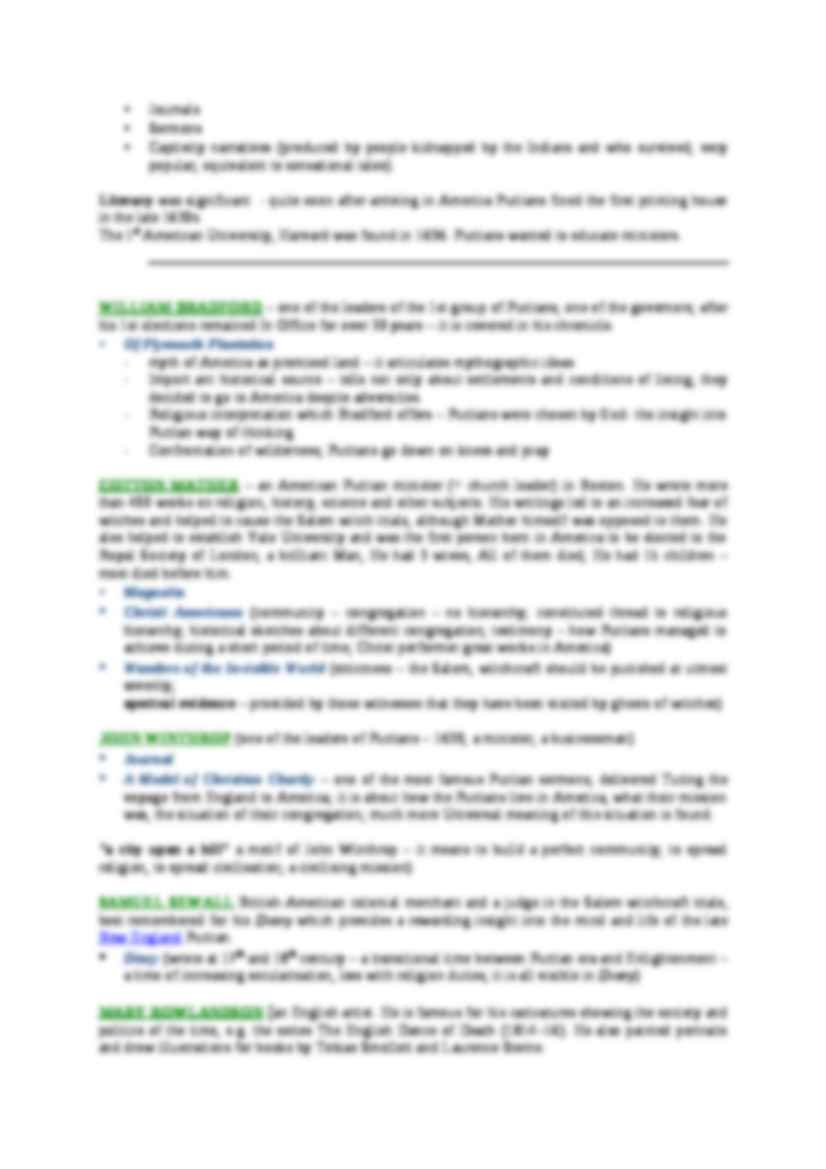 American literature in English written in America
Factors such as: language
place help us define American literature in general.
subject matter Origins of American literature
3rd assumption - Puritans
For many years the assumption was that American literature begins with Puritans.
American literary texts in English - poems, diaries, journals, sermons composed by Puritans.
The settlers in Virginia - 15 years before Puritans. The settlers who lived in Virginia didn't produce any important works, with the exception of books by John Smith. He had the office equivalent to government, historical books about Virginia. Why did he failed? - He conveyed to us a story about Pocahontas. He was the only person in Virginia who wrote sth important but it was written rather from historical point of view. Populations - the settlers in Virginia were poor uneducated people devoted to work exclusively. They didn't care about reading or writing, were just illiterate. Those richer ones, who payed cared only about profit. 2nd assumption - Spanish and Portuguese explorers
Most anthologies begin with Puritans. Anthologies published later contain English account of works during the period of exploration written by Spanish and Portuguese explorers.
Spanish and Portuguese - their foreground - exotic aspects of territories of Native inhabitants, captivated the European audience; want to contrive responder the voyages. They didn't have namely to pay for expeditions, were sponsored by kings, queens and princesses. These expeditions were undertaken, were taking place during debated about the Earth - what did it look alike.
The account of exploration of Spanish and Portuguese as American literature, we think about subject matter; language nowadays is becoming more problematic.
1st assumption - Indians
Further back in time - narrative authors of the native American tribes - songs and narratives.
The term “literature” is not adequate here - Indian narratives were not written , they existed in oral form. There were hundreds of different tribes, 350 different languages - those traditional compositions existed in all those languages
Different tribes lived in different parts of America - different economies - all these differences would be reflected in the traditional compositions of individual tribes System of beliefs
Oral forms vs. Literature form
The oral quality of native American compositions were of fundamental importance
Are meant to be performed - it influences the form of the composition

… witches and helped to cause the Salem witch trials, although Mather himself was opposed to them. He also helped to establish Yale University and was the first person born in America to be elected to the Royal Society of London; a brilliant Man, He had 3 wives, All of them died; He had 15 children - most died before him.
Magnolia
Christi Americana (community - congregation - no hierarchy; constituted…
… depiction of Indians.
Michael Wigglesworth - British-American clergyman, physician, and author of rhymed treatises expounding Puritan doctrines. Wigglesworth emigrated to America in 1638 with his family and settled in New Haven. One of the major Puritan poets, the most famous poetry et the worst as a poet; popular.
The Day of Doom (called the 1st American bestseller; adequacy of the subject; a poetic…
… indecency). These writers and Taylor want to be a spinning wheel, want to be Gods; signs of his duty in relation to God and community).
Jonathan Edwards - a US clergyman whose powerful sermons (= religious talks) on the power of God helped to create a major religious movement, called the Great Awakening, in New England (1734-5). Edwards became President of the College of New Jersey (now Princeton…
…, emphasizing the widely-held belief that Hell is a real and functional place. Edwards hoped that the imagery and message of his sermon would awaken his audience to the horrific reality that he argued awaited them should they continue without Christ. The underlying point, is that God has given humanity a chance to rectify their sins. Edwards says that it is the will of God that keeps wicked men from the depths of Hell; this act of restraint has given humanity a chance to change their ways and return to Christ. Jonathan Edwards' sermon continues to be the leading example of a Great Awakening sermon and is still used in religious and academic settings today. The structure begins with quotation from the Bible and then application (in the final section of Sinners in the Hands of an Angry God, Edwards wishes…
... zobacz całą notatkę 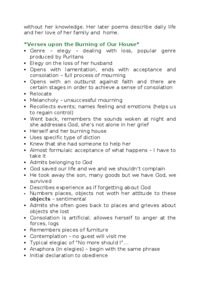 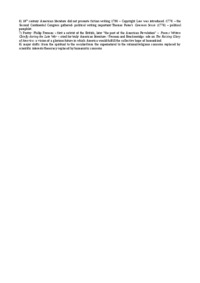